Upon learning I played tournament Chess in the late 1970’s the father of a new girlfriend mentioned a book he had read, Biorhythm: A Personal Science, by Bernard Gittelson, going on to say Bobby Fischer had been profiled during the match with Boris Spassky. Naturally this peaked my interest. I read the book, learning the importance of critical days. For example, the Japanese did not allow any professional driver to work on a double critical day, or allow any to pilot fly on those days and it cut the number of accidents tremendously. Over the course of my life while in a relationship with a woman I have charted their moods by jotting down simple notes such as, “bitchy day,” or “good mood day.” Hold off on those nasty comments and emails, please, as I have done the same for me. In addition I have focused on not only my individual day but on different periods in an attempt to understand biorhythms and whether of not they have anything to do with my state of being. I have come to the conclusion there is something to biorhythms, especially physically. A critical day is when one is changing from one phase to another. One can go from a low to a high phase, or the reverse. It has been my experience that it is much worse to go from a high phase to a low phase, and it becomes increasingly pronounced as one ages. It has been extremely difficult to understand the other two phases, emotional and intellectual. I can, though, say with authority that several woman in my life have sent me to the biorhythm chart when having a…how to describe it…let us say an “overly emotional” type of day. It has also been my experience over the last four decades that it is better to be in an emotionally low phase than a high phase. Being in a high phase is akin to being what is commonly known as “wound too tightly.” Beginning at birth everyone’s day of birth will be a critical day followed by either a peak or floor day. For example, I was born on a Monday, so every other Monday is an emotional critical day for me.

Some years ago I put something on the USCF forum concerning a World Championship match and biorhythms. The nattering nabobs ripped me a new one. I recall “pseudo-science” and “akin to astrology” among other remarks. For this reason I ask the reader to be open-minded and kind when commenting or sending an email. 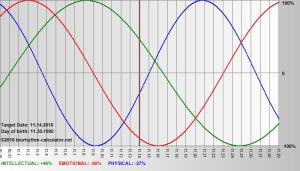 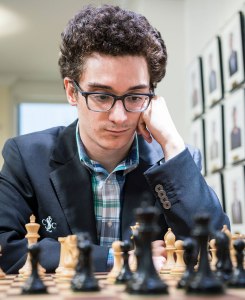 When the match begins the graph shows Magnus at his physical nadir while Fabiano is near his physical zenith. It is almost the exact opposite for the two combatants intellectually. Magnus will be going through an emotional critical day, transferring from high to low. Fabi will coming off of his emotional nadir. This illustrates how different are the two players, biorhythmically speaking. This is dramatically shown with this:

The lack of compatibility between the two players in the three main facets is striking. I left the latter part in for illustration purposes only because of the 100% match in intuition. Ordinarily I only look at the ‘Big 3’ but the total match had to be shown even though I have no idea what it means. When I learned about biorhythms there were only the top three.

The physical match up shows Carlsen playing most of the match in a physical high phase, while it is the opposite for Caruana. This could be a major factor, especially in light of the fact Fabiano has played so much Chess leading up to the match. Magnus has demonstrated throughout his career just how much endurance and stamina he possesses. No current player can match Carlsen in this regard. It would be wonderful to step into an alternate universe where the physical cycles are reversed, would it not?

If FIDE president I would strongly advocate a sixteen game match. With only a twelve game match I would advocate a tie match at the end of regulation would require another match one year later. If that match was also tied after regulation, then the champion would remain the champion. The challenger would have had two chances to beat the champ. To obtain another chance the challenger would have to again win the candidates tournament.

Simply put, the two contestants biorhythms could not be more disparate.

The critical period of the match will be games three through six. One look at the chart of the challenger vividly illustrates this fact. Caruana will be undergoing biorhythmic changes in all three phases. His biorhythms will be going every which a way…

The chart of the World Champion looks much “smoother” in contrast.

I did this comparison in an attempt to make a prediction according to biorhythm theory. After studying the charts I am unable to do so as the disparity is simply too great. How much of a factor will it be that Magnus will be physically high during the latter part of the match? How much will it matter that Fabi will be high intellectually? In a longer match of even sixteen games, the number many time World Chess Champion Mikhail Botvinnik said was needed to determine a winner, the physical factor would play a larger part, but this is a shorter match. They are both young so the physical aspect may not mean as much as the intellectual, but how does one quantify the intellectual biorhythm? As I have grown older the physical factor is much easier to quantify, for example. Some physical critical days, especially transferring from high to low, are pronounced in a way that can be felt and understood. It may take a huge amount of information to demonstrate the kind of impact an intellectual critical day produces. I just do not know…One thing I do know, though, is that this will be an extremely interesting match, biorhythmically speaking.

If my life were on the line I would have to go with the current Champion because of the tiebreak issue. If the match is even then Magnus will be a heavy favorite.

Hypothetically speaking, if there were no tiebreak and my life depended on only the biorhythms of the players, again I would be forced to go with Magnus because of the critical period between games three and six for the challenger and his physical high phase toward the end of the match.

That was from the logical ‘Spock’ part of my brain. The ‘Captain Kirk’ emotional part from my heart will be hanging on every move Fabiano Caruana makes during the course of the match.

I would also like to mention I plan on spending much time watching, and listening, to the best Chess internet broadcasting trio, Yasser Seirwan, Maurice Ashley, and Jennifer Shahade, which can be found here (https://www.uschesschamps.com/2018-today-in-chess/world-chess-championship).

LM Brian McCarthy left a comment on the previous post and provided a very interesting link. Brian writes, “Susan Sallon explores the impact of chess on primary school children’s cognitive development. She debunks every last study before hers as being flawed by low numbers as you say or bad methodology or both. Her’s is hard to find fault with, unless you want every grade tested in the same fashion.”

“In the South Bronx NYC, Stuart Margulies (1990 – 1992) conducted a study to look at changes in reading scores after chess instruction. Mid-elementary school children joined chess clubs at school. In the 1st year, they received instruction by chess masters. In the 2nd year, they also participated in computer-supported chess activities. Chess club membership was voluntary. Before the study began, students were assessed, using a standardised reading test. In this instance, the “control” group was the National Norm for the same grade students in the same school district. Students in the chess group made greater improvements than the national norm. However, since the chess group had higher pre-test scores than the control, Margulies aimed to address the selection bias, by comparing the chess group scores with those of a non-chess control group, consisting of children with pre-test scores comparable to the chess group. But again, the chess group showed more gains than the control group. However, Margulies himself, is quick to point out that “chess participants form a pool of intellectually gifted and talented students. Students who join this group make contact with a core of high achievers and thereby develop more academic interest, speak at higher levels of standard speech……”

Brian also provides a link to a page which contains an interesting study recently conducted in Great Britain by “the “Chess in Schools and Communities” Initiative (CSC) set up by International Chess Master, Malcolm Pein.” A link can be found in Brian’s comment, and I will provide a link to the PDF of “Susan Sallon explores the impact of chess on primary school children’s cognitive development.” (http://www.chessinschools.co.uk/download/research/Susan_Sallon_Dissertation.pdf)

This study appears to be very good news for the effect chess can have on students. It is possible that this is the best news of any study yet conducted on chess and education, at least from a chess perspective. Kudos to LM Brian McCarthy for sharing this information!

Former GCA Board member Tim Payne, who resigned from the board, along with the man I hope becomes the next President of the Georgia Chess Association, Frank Johnson, sends information about the “largest study in world about impact of chess on education is underway in Israel.” – http://www.israel21c.org/social-action-2/can-chess-make-you-smarter/

In an article, Can chess make you smarter? by Viva Sarah Press, dated January 23, 2013, we learn, “Boris Gelfand made all the right moves to become Israel’s highest-ranking chess player. Now, he’s partnering up with an Israeli university to launch the country’s first scientific research project focused on chess. The Grandmaster Chess Research Project is a one-of-a-kind initiative to develop a novel academic approach to the skills and culture of chess-playing that can, in turn, contribute to social and scientific development.”

We also learn, “Gelfand’s ranking as vice world champion is what triggered the Grandmaster Chess Research Project.” That is the first time in my four and a half decades I have heard anyone called a “vice world chess champion” although I will admit to having heard some called the “world champion of vice.”

“The program will provide an opportunity to achieve breakthrough research and social outreach in a field that has not yet been fully explored,” said University of Haifa Vice President and Dean of Research Prof. Michal Yerushalmy. The researchers will examine the impact of chess on students’ abilities in math, language acquisition, and other areas.”

“I am sure this will make our society better,” Gelfand said during a toast to launch the new research initiative. “I know leading intellectual professionals who succeeded thanks to their playing chess in school and continued playing alongside their professional development.”
(http://www.israel21c.org/social-action-2/can-chess-make-you-smarter/)

My thanks to Tim Payne for sharing the information. Many detract from, but only a few “add to” the discussion, and I appreciate those, like Brian and Tim, who have added something pertinent. The more one knows the better the chances of obtaining the truth, at least in theory.