Magnus Carlsen, the best chess player alive, has been slipping into online speed tournaments behind pseudonyms to crack jokes, let loose, and destroy the competition. 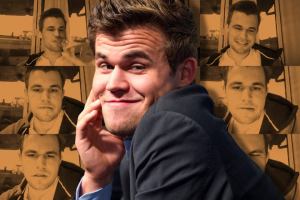 Magnus Carlsen smirks and holds his hand up to his face. Behind him are screenshots of his face from livestreams.

It was the final game of the 2018 World Chess Championship, and reigning champ Magnus Carlsen was about to piss off almost every commentator in the chess world. In a clearly favorable position, with a 30-minute time advantage over opponent Fabiano Caruana, Carlsen offered his hand for the 12th straight draw of the 12-game series. Neither side had won a single game—a first in the history of the world championship.

Commentators saw the move as heretical to the spirit of competition, “cowardly” even. Former champ Garry Kasparov suggested Carlsen was losing his nerve. The crown would have to be determined in tiebreaks: rapid games, more similar in time controls to a casual match in the park than the hours-long marathons that preceded them. Each side would get 25 minutes to make all his moves, with a 10 second bonus added each time he punched his clock.

It was Carlsen’s bread and butter. He was the World Blitz Chess champion as well and bet on his quick intuition to close the match out decisively. He bet right—bulldozing Caruana with three consecutive wins to retain the world title. When asked about his critics at the press conference, a grinning Carlsen said, “They are entitled to their stupid opinions.”

Though some fans were still irked that he played it safe in the classical games, a new narrative started emerging: Carlsen, the supremely gifted natural, brought Caruana out of the memorized computer analysis that defines so much of the contemporary circuit. Far from losing his nerve, Carlsen was ushering the match into a rawer, more competitive form. He put the clock on Caruana, and Caruana couldn’t keep up.

In the commentary on the tiebreaks from popular YouTube channel ChessNetwork, the most liked post under the channel’s game analysis echoed many chess fans’ sense of celebration. It read, “This World Chess Championship is a tale of two people. For two weeks, we saw [Carlsen]. Today, we saw Dr. Drunkenstein.” The comment was liked almost 600 times.

“DrDrunkenstein” is one of many aliases Magnus Carlsen has played under during the past two years, when he went on a killing spree across the speed chess tournaments of the internet. Since winter 2017, Carlsen has taken to livestreaming his games on a variety of platforms, which has provided a surprisingly entertaining window into the mind of an all-time great.