It is my misfortune to notify you I must take a break from blogging because of back pain, caused by simply bending at the waist while cleaning the desk. Upon once again feeling the searing pain I managed to get up the stairs and into the bed, which is where I spent all of that day and night, in hopes of feeling better in the morning. Unfortunately, it did not happen and the paramedics had to be called. It took some time for them to arrive as the only ambulance at the local hospital was in use, so one had to come from another nearby city. Things are different in the country.

The paramedics are good at their job, but still, moving me from the bed to the contraption, a mini-wheelchair type thing, caused me to scream out in pain. The contraption had something called “tiger tracks,” which allowed me to be wheeled down the stairs in lieu of being carried down by the paramedics., one of whom was talkative. He mentioned what a wonderful invention was the “tiger tracks” because the poor paramedics had to carry people down steps, which caused many of the paramedics to have back problems. Once outside I had to be loaded into the ambulance, which again caused me to scream out in pain.

Unlike a city hospital with all of its bustle, this country hospital seemed rather quiet, without much activity, so I was seen and questioned by the nurses quickly. I was prepped with an IV, etc., and answered their questions. The nurses elicited the information needed and since the doctor had yet to arrive asked general questions, learning that Patricia and I were originally from “the city.” It has been said that the state of my birth, Georgia, is really two different states, Atlanta, and the rest of Georgia. Atlanta is known colloquially as “the city.” One of the nurses said, “In the country we say, “My back went out on me.”
“Funny,” I said, “but we city slickers say the same thing!” This caused some laughter.

The doctor arrived and began asking questions, learning this was the second time I had been delivered to a hospital in an ambulance because of being unable to walk. I told him morphine had been administered the first time I had been in the hospital. The first was back in the fall of 2015. I had spent a torturous night writhing on the floor unable to walk because of extreme pain when “my back went out on me.” That was not the first time being afflicted with extreme back pain. I was young and strong enough to withstand the pain and continue doing most of what I was doing on the other occasions. An example would be the time I was forced to man the front desk at the House of Pain, aka, the Atlanta Chess & Game Center, when Spinks informed me he was too ill to work. The place had not been cleaned, so I nabbed the roller broom, which had a very short handle, and began cleaning the floor. Doing so meant bending awkwardly and, you guessed it, “my back went out on me.” This was a Saturday, fortunately with no tournament. Still, we were open around the clock and I managed to work all day and into the night, while obviously in great pain. I grimaced with pain the whole day. It was a struggle to even stand up…One legendary Chess player who lived nearby went home and brought me an Icey Hot pad to tape to my back, which helped immensely. This fellow later became my roommate when I moved into his apartment.
That ended in 2015, the year I turned sixty-five. The back went on me at the apartment and I spent a torture filled night on the floor in hopes it would improve by morning. It did not improve and when my roommate opened the door to my bedroom in the morning I told him he needed to “Make the call.” His response was to say, “We’ll let you rest easy a little while,” before closing the door. He could not be bothered to make the call until after smoking his morning pot while drinking his first cuppa coffee…So I spent another hour on the floor wracked with pain with tears running down my cheeks.

The doctor prescribed something which was administered by IV. A little later the nurses entered asking that I attempt to get out of the bed and into a small wheelchair. I managed to stand, but when attempting to sit I screamed out in extreme pain. The nurses left immediately to find the doctor. He returned and gave me morphine, injected into the “fat globules” in my derrière by one of the nurses. Patricia said they were SHOCKED, and described the sound emanating from me as a “blood-curdling scream.” One of the nurses said it sounded more like a “Rebel yell.” They sort of laughed nervously when I replied, “Yeah, like at Gettysburg.”

The morphine did the trick and I managed to walk out of the hospital on my own power, with one of the nurses lightly holding my arm.

I am in recovery mode. Because of the pain I am unable to spend the necessary time sitting at the ‘puter to continue writing the blog. It is with regret I must discontinue the blog for some time, at least until I recover. I have enjoyed writing the blog immensely, but even more is that I have greatly enjoyed the emails sent by you readers. I have been in touch with so many people that I would never have had any contact with if I had not started writing the old BaconLog, followed by the AW.

Although my time sitting at the computer is limited, I did read an article yesterday I would like to share with you. Please check back in about a month or so when I am able to fire more salvos. 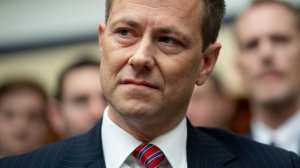 ‘NO SENSE OF DECENCY’

Republicans Thought Peter Strzok Would Be a Punching Bag. He Just Knocked Them Out.

He was supposed to be a key in the imaginary conspiracy Trump’s congressional lackeys and media fantasists have desperately tried to write as history. He was having none of it.
Rick Wilson
07.12.18 4:04 PM ET

Those who forget the lessons of televised congressional hearings are doomed to repeat them, which is why the morning segment of the Capitol Hill show trial of veteran FBI agent and former head of the Bureau’s Counterespionage division Peter Strzok turned into a disaster for Republicans.

Donald Trump’s congressional enablers, sycophants, and political suck-ups wanted a punching bag, but Strzok instead delivered one of the rarest of moments: the full Joseph N. Welch.

Welch, the chief counsel for the U.S. Army during the infamous McCarthy hearings in 1954, had reached a breaking point. After McCarthy’s tendentious badgering reached a fever pitch, Welch delivered a famous rejoinder that ended the Wisconsin senator’s career. Watched by millions on live television, Welch went full beast-mode.

“If it were in my power to forgive you for your reckless cruelty I would do so,” said Welch. “I like to think I am a gentleman, but your forgiveness will have to come from someone other than me… You’ve done enough. Have you no sense of decency, sir? At long last, have you left no sense of decency?”

This morning, it was Strzok’s turn. After an hour of drama-queen badgering from Trey “Benghazi” Gowdy and Bob Goodlatte, Strzok issued two passionate statements that will be the takeaways from an otherwise disorganized and contentious shitshow of a hearing before the House Judiciary and Oversight Committees.

“I can assure you, Mr. Chairman, at no time, in any of these texts, did those personal beliefs ever enter into the realm of any action I took. Furthermore, this isn’t just me sitting here telling you you don’t have to take my word for it. At every step, at every investigative decision, there are multiple layers of people above me, the assistant director, executive assistant director, deputy director, and director of the FBI, and multiple layers of people below me, section chiefs, supervisors, unit chiefs, case agents and analysts, all of whom were involved in all of these decisions. They would not tolerate any improper behavior in me any more than I would tolerate it in them.”

He closed with this fastball:

“That is who we are as the FBI. And the suggestion that I in some dark chamber somewhere in the FBI would somehow cast aside all of these procedures, all of these safeguards and somehow be able to do this is astounding to me. It simply couldn’t happen. And the proposition that that is going on, that it might occur anywhere in the FBI, deeply corrodes what the FBI is in American society, the effectiveness of their mission, and it is deeply destructive.”

The second was a shot across Donald Trump’s bow: “I understand we are living in a political era in which insults and insinuation often drown out honesty and integrity. I have the utmost respect for Congress’s oversight role, but I truly believe that today’s hearing is just another victory notch in Putin’s belt and another milestone in our enemies’ campaign to tear America apart.”

This latest spectacle was designed for one purpose only: the destruction of Special Counsel Robert Mueller’s investigation into Donald Trump’s Russia ties. Republicans like Fredo Nunes who have tried to present a series of dramatic, table-flipping reality TV moments to reach that goal have failed time and again to derail the Mueller investigation. This morning was yet another swing-and-a-miss for the Trump GOP.

Because Trump supporters live in a hermetic media echo chamber, these hearings are part of a predictable, hokey Kabuki dance. They’re a device for generating a new round of hyperbolic base-only stories that will follow the same dumb arc as all the rest. In the coming days, you’ll see Sean Hannity flirt with apoplexy, coating the camera lens with flecks of spittle as he rants over Strzok’s perfidy. You’ll see pro-Trump columnists herniate themselves stretching to turn flippant text messages into a vast conspiracy. Twitter will be a flood of moronic memes, white-hot takes, and promises that Strzok will soon be in Gitmo alongside Hillary, Obama, Podesta, and Soros.

None of it will deter the Terminator in the Special Counsel’s office. None of it will change the facts of Russia’s interference in the 2016 election, and Trump’s ass-deep ties to Russian money and influence. Trump’s unhinged, shithouse-rat-crazy tweets today should tell you how deeply he fears Mueller.

Strzok was supposed to be a key in the imaginary conspiracy that Trump’s congressional lackeys and media fantasists have desperately tried to write as history. The idea that his text messages poison the entire Mueller investigation was a pillar of their defense of the president. This morning they were going for a quick kill. They needed Strzok to flail, and wilt. The Gowdy, Goodlatte, and Gaetz types needed their grandstanding, dick-waving mock outrage to leave Strozk shaking and begging for mercy.

Strzok had none of it. In this morning’s round he left the Trumpists of the House staggered in their corner, cut and shaky, wondering where Strzok learned to hit back that hard.

By Josh Dawsey and Philip Rucker February 18 at 9:55 PM

stewed aloud and lashed out with fresh anger about the intensifying Russia probe over the weekend.

Rick Wilson, a Republican strategist based in Florida and a Trump critic, said the president’s tweets read to him like “a cry for help.”

“He must be feeling a lot of different pressures building on him right now — personal and political and legal,” Wilson said. “He must feel like he has to sweep all the pieces off the chess board

and try to restart. But these problems can’t be papered over by tweets.”