Checkmate! The Love Story of Mikhail Tal and Sally Landau,

is a beautiful book written about a lifelong love between two people, one of whom, Mikhail Tal,
happened to win a World Chess Championship match against the man called “the patriarch of the Soviet School of Chess,” Mikhail Botvinnik. (https://en.chessbase.com/post/botvinnik-the-patriarch)

The book, written by Sally Landau, and published by Elk and Ruby Publishing Company (http://www.elkandruby.com/), is a wonderful history of a time long gone with the wind. The author brings to life a different time and the people who lived during the Soviet Communist period. The book, like a Chess game, has only three chapters, the opening by Sally, the middle by Gera, the son of Mikhail and Sally Tal, and the end, again by Sally.

She begins the book by writing about herself. “I am an inconsistent and impulsive person, who first does and only then thinks about what I have done. I am an ordinary, vulnerable woman, in which a womanly nature lived and lives, found joy and finds joy, suffered and suffers, in the full sense of those words. The way I see it, selfishness and a desire for independence somehow manage to coexist inside me with love for the people surrounding me and a subconscious wish to be a woman protected by a man who lives for me – protected by him from all sorts of major and minor everyday troubles.”

Later she writes, “Still sharp contradictions coexisted within me: on the one hand, this immense fear of losing my personal freedom, on the other hand, this equally immense fear of solitude and a subconscious desire to have a strong man beside me with whom I wouldn’t be afraid of falling off an overturned boat in the open seas, even if I didn’t know how to swim. These contradictions played a significant role in my life with Misha…”

She writes about her impression of what it was like being a Jew in the Soviet Union. “So it wasn’t the external appearance of the Tals’ apartment that struck me that evening. Rather, it was its anti-Soviet spirit that I sensed. I immediately inhaled this pleasant middle-class air. It was apparent straight away that the people living there were not “mass-produced” but very much “hand-crafted”, and that relations between them did not fit into the usual framework of socialist society.”

“Misha was born a frail child. He had two fingers missing from his right hand. When she (Ida, Mikhail Tal’s mother) first saw her son after he was brought to her and unwrapped from his swaddling clothes she again fainted in shock at the site of his three crooked fingers. She was unable to breastfeed. Her lack of milk was perhaps due to those shocks. She was treated for a long time after that.

“When he was just six months old, Misha was struck by a nasty meningitis-like infection with a very high temperature and convulsions. The doctor said that his chances of making it were remote, but that survivors turn out to be remarkable people. Well, Misha began to read at the age of three, and by the age of five he was multiplying three-digit numbers – while adults were still struggling to solve the math with a pencil he would tell them the answer.”

“He got “infected” with chess at the age of seven and began to spend nearly all his time at the chess club, nagging adults to play him.”

Gera was a Medical Doctor and qualified to write about Tal’s well known medical problems.

“Well, the actual start of my father’s physical ailments, however banal it may sound, was the fact of his birth. Ever since then he simply collected illnesses. But the fundamental cause of course was his totally pathological, nephrotic kidney. It tortured him relentlessly. People suffering from kidney disease know that there is nothing worse in the world than pains in the kidneys. I don’t understand how such people can even exist, let alone play chess. I’m sure that it wasn’t my father who lost the return match to Botvinnik, 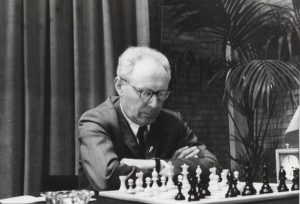 but his diseased kidney.”

“My father treated his life like a chess game, somewhat philosophically. There’s the opening, then the opening transposes into the middle game, and if no disaster strikes in the middle game you get into a dull, technical endgame, in which a person ultimately has no chances. As far as I know, father didn’t gain pleasure from playing endgames – he found them boring and insipid. Force him to give up smoking, brandy, partying and female admirers – basically, the source of intense experiences in the middle game of life – and he would find himself in the endgame, when he would have nothing left to do other than passively see out the rest of his life. However, that would have been a different person just resembling Tal. And what’s the difference – to die spiritually or die physically if you can no longer be Tal?”

Throughout their life, together and apart, Mikhail and Sally had other loves and lovers, yet remained friends. A love interest of his was written about but only named by the letter “L.” Research shows this was Larisa Ivanovna Kronberg,

a Soviet/Russian actress and a KGB agent. She was named Best Actress at the 1955 Cannes Film Festival for her performance in A Big Family. In 1958, she was involved in the Ambassador Dejean Affair, Kronberg lured Dejean in a honey trap. She was in a long-time relationship with World Chess Champion Mikhail Tal in the 1960s, they parted in the 1970s. (https://en.wikipedia.org/wiki/Larisa_Kronberg)

Sally had an affair with a man about whom she writes, “I won’t name him in the book. Why? Let’s say he was a high-up government official…I will call him “The Minister”…Let that be his name here.” Reading this caused me to reflect upon something IM Boris Kogan said decades ago about the KGB. “Mike, KGB like octopus with many tentacles that reach everywhere!” The relationship between Sally and “The Minister” was doomed to failure because a good Soviet communist did not consort with a Jew. Sally writes, ” Misha was such a unique person! I was living with Alnis; at the time he was effectively a common-law husband; and Misha understood that perfectly well. And yet, while he treated Alvis with respect, he continued to consider me his only woman and the most important woman in the world – his Saska. Alnis took quite a liking to Misha, saw what a remarkable person he was, and would say of him: “Tal isn’t a Jew. Tal is a chess genius.” 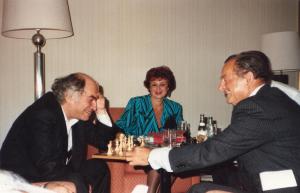 Tal playing the husband of his former wife Joe Kramarz, not only a Chess player but a HUGE fan of Mikhail Tal!

The book is replete with things like this from Yakov Damsky writing in Riga Chess, 1986. “He has a wonderful ability with language and always has a sharp wit. I remember, for example, after a lecture some tactless dude asked Tal: “Is it true you’re a morphinist?” to which Tal instantly replied: “No, I’m a chigorinets!”

“Petrosian once joked morbidly: “If I lived the way Tal does I would have died a long time ago. He’s just like Iron Felix.” (The nickname of Felix Dzerzhinsky, the founder of the KGB)

Having worked at the House of Pain I got a kick out of this: “Chess players talk to each other in the language of notation. I was always amazed at this. Although I understood nothing of it, I listened to them as though they were aliens, observing their emotions. If, for example, Tal, Stein and Gufeld got together, their conversation could flow along the following lines:

And this wonderful chitchat would continue endlessly, with people not “in-the-know” thinking they were in a madhouse.”

During tournaments at the Atlanta Chess & Game Center it could be, at times, a “Madhouse of Pain.”

A player would walk up talking about his game in these terms while having the position clearly in his mind. I, on the other hand, had no clue, but would nod in agreement, or frown when called for, while commiserating with the player, understanding, but not understanding, if you get my drift. The worst was when two players who had just finished their game would come downstairs talking in variations, bantering back and forth, then look at me asking, “What do you think, Mr. Bacon?!” To which my usual response was, “That’s a heckofaline!” Hopefully they would smile and nod in agreement before giving way to the next player or players wishing to tell me all about their game…

“A grandmaster said to me once: “When Misha finds himself in a hopeless position, his head tells him this but he doesn’t believe that he, Tal, has no chances. He starts to seek a saving combination, convinced that such a combination exists – it’s just a matter of locating it. And as a rule he finds it. However, despite all its beauty and numerous sacrifices, the combination turns out to be flawed, and then the defeat becomes for him even more painful and humiliating than if he had been physically dragged face down in the road.”

After reading the above I reflected upon a game recently played over contain in the latest issue of Chess Life magazine. In reply to a letter to the editor GM Andy Soltis writes, “Good point, Dr. Seda-Irizzary. Tal is a splendid example because he understood the principle of “Nothing Left to Lose.” That is, when you are truly lost, you should forget about finding a “best” move that merely minimizes your lost-ness.” The game follows: I conclude the review with this paragraph: 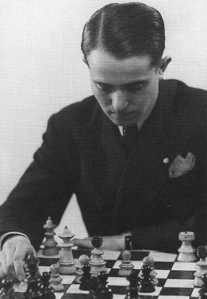 with whom I was great friends, once showed me around the Moscow chess club, and told me, pointing at the photos of world champions on the wall: Sallynka, look at them. They are all the most normal, mad people.” Well, I’m ever thankful that I lived my life among such “normal, mad people” as Misha, 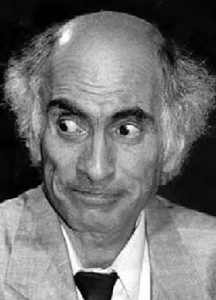 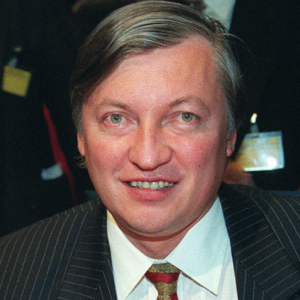 (Garry Kasparov is also a genius, but not mad – that’s my opinion, anyway.)” 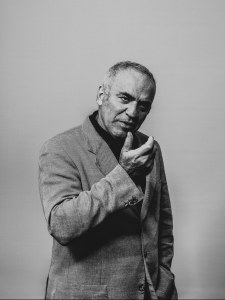 I enjoyed this wonderful book immensely. Anyone with a love of the history of the Royal Game will be greatly rewarded for spending their time reading a beautifully written love story surrounded by the “mad men” who play the game of Chess. Please keep in mind I have told you not all the words.
I give it all the stars in the universe!