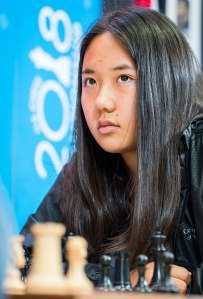 the new Co-Champions of the Women’s US Chess Championship! 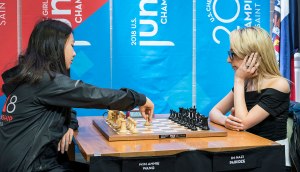 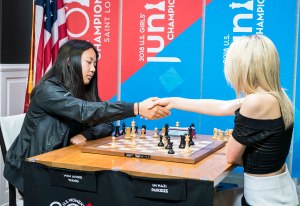 Before sending emails and leaving comments, I am aware of the so-called “playoff” which was “won” by Nazi. The idea of some kind of “hurry-up and get it over” playoff in Chess is anathema to me. The two women tied for first in the only games that matter, serious games in which they spend hours playing. To my mind that is all that counts. I am aware that most people do not agree with my way of thinking. They are wrong. Back in the day playoffs consisting of serious games were held. I would prefer to see a match using the same time limit as the eleven games played during the tournament to settle the matter. Some players who are extremely strong at Chess played with longer time limits are not as proficient when forced to play “hurry-up” Chess. The challenger for the title of World Chess Champion falls into that category. Fabiano Caruana is no match for Magnus Carlsen in any kind of “hurry-up” playoff, which makes Magnus the favorite in the upcoming match. If Fabi is to win he MUST win in the much longer, much more serious, real games.

There is absolutely nothing wrong with having Co-Champions, other than the driving forces prefer to have only one winner of each tournament to put on the cover of the magazine as the “face” of US Chess. Never thought I would live to see “speed” Chess settle a World Championship match…

At the beginning of his interview with Maurice Ashley, the new US Chess Champ, Sam Shankland, said about his play, “I played really well and got really lucky and that’s a tough combination to beat.” I was reminded of my days playing Backgammon. Many times after beating an opponent he would say, “You were lucky.” My response would invariably be, “I would rather be lucky than good, because when I am good and lucky, I cannot be beat!”

Yes, there IS luck in Chess. Ask Nazi…In the penultimate round she was dead lost, but due to a horrendous blunder by her opponent, Tatev Abrahamyan, she won the game. That is the kind of luck to which Sam was referring. She was also lucky in that Annie collapsed in the last round, which brings to mind one of the most, if not the most, famous collapse by a woman in the history of sport. That would be Julie Moss competing in the 1982 Hawaii Ironman Triathlon.

Nazi also had to overcome the unfair extra game with the black pieces. She had the white pieces five times while Annie sat behind the white pieces six times. On the other hand, Annie’s performance rating overall was slightly higher than Nazi, 2506 to 2503. If there must be a playoff I would like to see a playoff between the two using the same time control used during the Championship.

Finally, why is there a separate US Chess Championship for women? To have such a tournament is, quite simply, segregation. 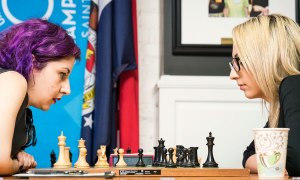