I learned of the death of the owner of Thinkers Press, Bob Long,

from an email from Michael Mulford after opening my mail. I spent some time in Davenport, Iowa, in 2002, and some of the time was spent with Bob, who was quite an interesting character. I am saddened to hear of his death, especially because of the way he was murdered in cold blood.

DAVENPORT, Iowa (KWQC) – A 19-year-old has been arrested and is being charged with murder after police say they found a 74-year-old man dead in Davenport.
Police say 19-year-old Charlie Gary, of Davenport,

Police say 19-year-old Charlie Gary, of Davenport, admitted to police that he went into the man’s home forcibly with the intent to steal the man’s car. Police say Gary strangled Long, killing him and then stole property and his car and left the scene. (KWQC)

admitted to police that he went into the man’s home forcibly with the intent to steal the man’s car. Police say Gary strangled Long, killing him and then stole property and his car and left the scene. (KWQC)

Police say on Tuesday, just before 5:45 p.m., they were called to the 1500 block of LeClaire Street in reference to an unresponsive person. That man, 74-year-old Robert Long, was pronounced dead at the scene.

Police say 19-year-old Charlie Gary, of Davenport, admitted to police that he went into the man’s home forcibly with the intent to steal the man’s car. Police say Gary strangled Long, killing him and then stole property and his car and left the scene. Police say they later located Gary in Long’s vehicle when he was arrested.

Gary has been charged with 1st-degree murder, 1st-degree robbery and 1st-degree burglary in reference to the incident. He’s currently being held at the Scott County Jail.

Detectives are continuing to work on the investigation. No further information is being released at this time.

This is from one of Bob’s blogs:

“Since 1985 I have reviewed or commented on about 2,000 chess books, magazines, equipment, DVDs, and websites. I’ve published: Chessstamps Informant, The Chess Arts, The Chess Atlas, Lasker & His Contemporaries, The Chess Gazette, The Chess Reports, Chess EXTRAS, the Purdy Chess Chronicles, and soon SCORE (for opening theory). I am known for being the publisher at Thinkers’ Press, inc. (TPI)… a company which has published nearly 140 items not including DVDs, CDs, or journals. Others know me for publishing all the materials (licensed) from the CJS Purdy estate. I still publish books for hire; contact me for details. Unlike other companies, my publishings are “hand made”–i.e., it’s all done by myself.”

There is an article by Jane Croft on the Financial Times website, dated Jan. 27, 2015, “Putin accused of presiding over ‘mafia state’ at Litvinenko probe.”

“Russian President Vladimir Putin was on Tuesday accused at the opening of an inquiry into the death of former Russian spy Alexander Litvinenko of presiding over a “mafia state” with links to organised crime syndicates in Spain.”

This man, RasPutin, is the power behind the world chess federation known as FIDE. This is also the man seen hobnobbing with the chess elite, including the World Human Chess Champion, Magnus Carlsen, and the man he vanquished for the title, Viswanathan Anand. (http://www.sochi2014.fide.com/closing-ceremony) Is it any wonder the public has tuned out the Royal game? 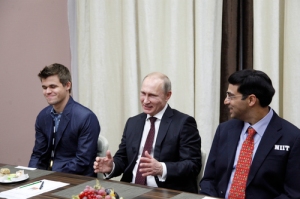 The article continues, “Ben Emmerson QC, representing Litvinenko’s widow Marina at the public inquiry, claimed that the evidence for Litvinenko’s “horrifying assassination” by a radioactive isotope “all points in one direction” and was only likely to have happened “on the order of very senior officials in the Russian state”.

In a hard hitting speech, Mr Emmerson claimed that Litvinenko was killed “partly as an act of political revenge for speaking out, partly?.?.?.?as a message of lethal deterrence to others and partly to prevent him giving evidence in a criminal prosecution in Spain that could have exposed Putin’s direct link to an organised criminal syndicate in that country”.

Mr Emmerson claimed that the events showed the “unlawfulness and criminality at the very heart of the Russian state”.

“The intimate relationship that will be shown to exist between the Kremlin and Russian organised crime syndicates are so close as to make the two effectively indistinguishable,” Mr Emmerson claimed.

“The startling truth, which is going to be revealed in public by the evidence in this inquiry, is that a significant part of the Russian organised crime around the world is organised directly from the office of the Kremlin. Vladimir Putin’s Russia is a mafia state,” Mr Emmerson alleged to the inquiry.

Mr Emmerson added that Litvinenko had been a “marked man” since giving a press conference in Moscow alleging national security service FSB corruption and Mr Putin was a “ruthless and deadly enemy” to Litvinenko, Mr Emmerson claimed.

“The evidence all points one way,” Mr Emmerson said claiming that the two main suspects implicated in the poisoning had “links to Putin’s inner circle”.

Mr Emmerson said he believed the inquiry would show not just a trail of polonium from London to Moscow but a trail leading “directly to the door of Putin’s office” and Mr Putin would be “unmasked” by the inquiry “as a common criminal dressed up as a head of state.”

The former Russian spy, who died after ingesting radioactive polonium 210, may have been poisoned “not once but twice”, the inquiry into his death was told.

Sir Robert Owen, chairman of the public inquiry, said the circumstances of Litvinenko’s death brought in to focus issues of the “utmost gravity”, which had attracted “worldwide interest and concern”.

The inquiry, which is due to last for 10 weeks, will look at the circumstances around the death of Litvinenko who was allegedly poisoned as he sipped green tea at Mayfair’s Millennium Hotel in November 2006.

The death of Litvinenko sent relations between the UK and Russia to a post-cold war low, with diplomats expelled by both sides.

Russia has long denied claims, attributed to Litvinenko on his deathbed and repeated by his friends and family, that Moscow ordered his death after the Kremlin critic was granted asylum in the UK.

UK prosecutors had accused two Russians Andrei Lugovoi and Dmitry Kovtun of the murder. They have strenuously denied any wrongdoing. Russia has refused to extradite them under the terms of its constitution.

Robin Tam QC, counsel to the public inquiry, told the hearing that scientific evidence will be presented to the inquiry that appeared to show that Litvinenko was poisoned with polonium “not once but twice”.

As well as a November 2006 meeting at the Pine Bar of the Millennium Hotel, the hearing was told an earlier poisoning attempt may have been made at a meeting weeks earlier.

Samples from Litvinenko’s hair show that he may have been poisoned twice with the first attempt much less successful, Mr Tam told the hearing.

Mr Lugovoi and Mr Kovtun were present at two meetings with Mr Litvinenko — including at the Pine Bar at the Millennium Hotel in Mayfair.

Litvinenko, who converted to Islam before he died, claimed to police on his deathbed that he believed he had been targeted by the Russian security services on the orders of Russian President Vladimir Putin, according to details of his police interview conducted just before he died and read out to the hearing.” (http://www.ft.com/intl/cms/s/0/998d690c-a62c-11e4-9bd3-00144feab7de.html)

An article, “What’s Been the Effect of Western Sanctions on Russia?” appeared on the PBS website as a companion piece to the hard hitting documentary, “Putin’s Way.”

“When Russia annexed Crimea from Ukraine last March, the United States and European Union responded with an economic weapon — sanctions.

The first few rounds, applied in March and April of 2014, targeted Russian and Crimean officials, as well as businessmen seen to have close ties to President Vladimir Putin — his “inner circle” — with travel bans and asset freezes.

Since then, the West has steadily expanded its sanctions against Russian entities, targeting major businesses and parts of Russia’s financial, energy and military industries.

FRONTLINE talked to Anders Åslund, senior fellow at the Peterson Institute for International Economics, on Jan. 8, 2015 about the effects and consequences of Western sanctions on the Russian economy. Åslund served as an economic adviser to the Russian and Ukrainian governments in the 1990s.
Which round of sanctions do you think really had an effect on the Russian economy? How would you measure that?

The sanctions the U.S. imposed came in two big chunks. The first concerned Crimea, and they were only personal sanctions for Crimean and Russian leaders involved in the Crimean drama.

Then, the important sanctions were imposed on July 16, which are called sectoral sanctions.

We can see that no money has been going into Russia after July. No financial institutions dared to provide Russia with any financing more than a month after that. And that we know from talking to banks. …

The point is that the [July] financial sanctions have worked out as far more severe in their effect than anyone seems to have believed.
Would sanctions alone have damaged Russia’s economy without the current plunging oil prices?

There are three major causes for Russia’s economic troubles. The first cause is the corruption and bad economic policies that Putin pursues, which on their own would lead to stagnation, or at most 1 percent growth.

The second element is the falling oil prices. The oil prices have now fallen so much that Russia’s total export revenues this year will be two-thirds of what they have been before. That means that Russia will have to cut its imports by half. This is a big blow.

This is then reinforced by the financial sanctions, so that Russia cannot mitigate this blow by borrowing money. By ordinary standards, Russia is perfectly credit-worthy with a public debt that is only 10 percent of GDP. But if you don’t have access to financial markets, then it doesn’t matter how credit-worthy you are, because you’re not credit-worthy so-to-say.

Vladimir RasPutin has become a pariah. The world will watch as he is consigned to oblivion because he, and his friends, like FIDE President Kirsan the ET, is on his way off of the world stage. He is learning first hand something a fellow Georgian, Martin Luther King Jr., said decades ago. “In the end, we will remember not the words of our enemies, but the silence of our friends.”

Garry Kasparov must be following these events closely. In the immortal words of Bob Dylan, “For the loser now will be later to win/
For the times they are a-changin’.