While tooling around the interweb looking for information on the Land of the Sky Chess tournament which began last night (the second, hurry-up part of the first round is ongoing as I punch & poke) I discovered a nice article featuring the Charlotte Chess Center and Scholastic Academy. 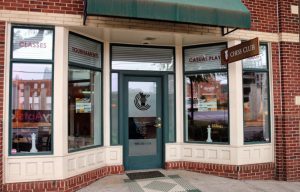 Notice the sign proclaiming only “Chess Club.” I began playing at the Atlanta Chess Club, which was held in a YMCA on Lucky street in downtown Atlanta, Georgia. It is where I won the 1976 Atlanta Chess Championship. My most vivid memory, though, is of the time there was a running gun battle right below on Lucky street, with real bullets being fired, between the cops and crooks. Most players went to the window to spectate. Fortunately, we were on the second floor so no bullets came our way. So engrossed in my fifteen minute game I stayed seated during the reality “show.” There was a Manhatten Chess Club, which is no longer in existence, and the Marshall Chess Club (http://www.marshallchessclub.org/), which is still open. The website shows an Adult Chess Class “Every Tuesday Night!” The oldest Chess club in the US is the Mechanic’s Institute Chess Club in San Francisco (http://www.chessclub.org/index.php). All ages are welcome at these venerable Chess clubs with no need for adding the word scholastic like all newer Chess clubs, such as the St. Louis Chess Club and Scholastic Center (https://saintlouischessclub.org/), have done.

“Since middle school, chess has been an integral part of Peter Giannatos’ life. He’s participated in more than 200 tournaments, and is recognized as a master level player. In fact, he’s a top-10 player in the state.

After graduating from UNC Charlotte in 2014, Giannatos, 26, figured he would concentrate on joining the working world. He had dreams of making chess his career, but knew that could be a longshot.

A longshot he has spent the last three years making a reality. Over that time, Giannatos became the owner and operator of the Charlotte Chess Center and Scholastic Academy. Located on Camden Road, near the LYNX East/West stop in South End, the center has more than 150 members – making it Charlotte’s first full-time center devoted solely to chess.” 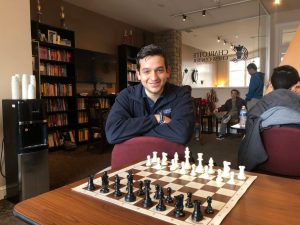 It looks real nice, unlike the Atlanta Chess Club & Game Center, which was also known as “The Dump” for good reason. As a matter of fact, the Charlotte Club looks downright OPULENT in comparison! 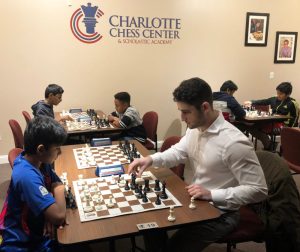 Although growing by leaps and bounds, Charlotte is no where near as large a city as Atlanta, especially when surrounding cities many miles away not in the city limits use Atlanta as their city in much the same way as people in the area of Atlanta known as Buckhead, where the Governor’s mansion is located, have done. The ‘Head has kept expanding because every business wants to be known as being part of Buckhead. One hundred fifty members seems a strong number of members for the relatively new Chess club.

I do not know the exact number of members the ACC&GC had at any time, but I do recall returning to work there when it had dropped to only a handful, or maybe two handfuls. It got back to me that the owner, Thad Rogers, said upon my return the number of members had grown to almost as many when the place first opened, which made me proud.

I hope to be able to visit the CCC&SA before I go to the Chess club in the sky. For all of my international readers, if you come down South I hope you include the Charlotte CC&SA in your itinerary.