This is the penultimate post in what has become my longest book revew, ever. 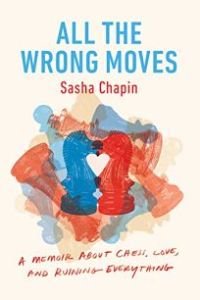 “People love using chess as a metaphor. Supposedly, Brazilian jiu-jitsu is the most chess-like of the martial arts. One chef I knew, upon hearing of my passion for the game characterized his selection of flavors as a “chess game I lay with you mouth, bro.” Part of me hates this tendency. After all, as I’ve mentioned, part of what makes chess wonderful is how much it isn’t like all to this other shit we put up with on earth. Chess has a way of encircling the imagination, of generating fanciful poetics and dubious conceptual linkage.”

Our hero meets Katherine, “…a senior editor at a publication that demanded scrupulously written arts criticism based on diligent research. He “…delivered to her inbox a scrambled piece of mumbo jumbo, larded up with a few pretty sentences so she maybe wouldn’t notice how bad it was. She noticed.”

And a new game of love was on!

“I lived two lives: a public, romantic one with Katherine, and a private, shameful one with chess.”

His chess life “…mostly consisted of playing thousands of games at my computer, huddled and nonplussed. This was not satisfactory. It was lonely and unglamorous and possessed no drama beyond the momentary rages of one game or another. When I told my children about my twenties, I didn’t want to explain that I spent big chunks of it in my bedroom staring at digital chess pieces, surrounded by granola bar wrappers, occasionally noticing the snow drifting by the window. And more importantly, I didn’t want Katherine to see me abasing myself in such a fashion.”

“No. If I was going to be a victim of chess, like Duchamp,

I was going to be a proud victim, like Duchamp. If I was going to waste my hours, I was at least going to waste them flamboyantly. Rather than skulking alone in my room, I decided, I would hold my head high. I would play in real tournaments, in countries near and far, for real money, against live, breathing opponents, hopefully with Katherine at my side…”

He did this because, “…chess is about the most human thing you can do.”

And because, “Chess takes the most banal act of all – violence – and makes it a symbolic ballet with a culture entirely of its own.”

The author, “…decided to set myself an ambitious goal that I would almost certainly fail to achieve, the key word being almost.”

“Yes, I thought: in roughly a year, I would play in the Los Angeles Open, and I would beat a player whose rating was at least 2000. That would represent a violent assault against the limits of my truly meagre talent.”

“Well, it’s just such a satisfying number: those three zeroes standing neatly in a line. Also, the prospect brought me a sort of vicious glee, because I imagined that whoever had taken their rating past that second thousand would be quite proud of themselves. Proud enough that they’d feel extra bad when their position came crashing down before me.”

When I began playing Chess seriously as an adult in Atlanta, Georgia, the top players attending the Atlanta Chess Club at the YMCA on Lucky street in downtown were rated near 2000 but there was not one who sported a 2000 rating. Although there were a few players with a rating beginning with a “2” Tom Pate was the top active player with a rating in the high 1900’s. When seeing the first number of my rating a “2” I will admit to being “quite proud.” I stopped playing Chess to begin playing the much more lucrative Backgammon and upon returning to Chess the going was difficult, to say the least. There was a period when bonus points stopped being added which caused rating deflation, making it even more difficult to garner the much needed rating points. When I did finally break the Expert barrier the Legendary Georgia Ironman said, “You did it like a salmon, Bacon, by swimming against the stream!” Tim figured I would have made it over 2100 if bonus points were still being handed out, but that mattered not to me because I had a TWO at the beginning of my rating.

Our hero made the decision to play in a tournament knowing, “All tournaments are created equal. Most are inglorious little affairs conducted in church basements on weekends. You do battle with a crowd of local yokels… Meanwhile, top-tier tournaments are calm,buttoned-down affairs, sponsored by energy companies and banks, taking place in spacious, teal-carpeted venues.”

“Economically, chess is sort of like acting: top people make money, second-rate people teach, and everyone else receives spotty compensation at best.”

The tournament was in Canada. “There’s a menacing lull that precedes all open chess tournaments – a silence tinted by the excitement of incipient conflict felt by a room full of dorks awaiting their fate. Their fate is determined, during those long moments, by the arbiters,

who run an algorithm that determines the pairings. Also, the computers are always beat-up old PCs. There are no Macs in the chess world. The anthropological significance of this is left to the reader.”

And what did our hero learn from the experience of playing in his second tournament?

“This is one of the embarrassing things about coming to chess in your twenties. When you’re in the lower ranks, your opponents are basically of two varieties: children with promise who haven’t yet developed their skills, and adults who are long past their peak, too old to calculate complicated tactics. Meanwhile, you float in the middle, in a state of static mediocrity.”

“Clearly, I needed to stop relying on my own judgment. What I really needed was a teacher – someone who could actually figure out why I was so terrible. One name came to mind instantly: that of Grandmaster Ben Finegold.”