The title of a new article at the Chessbase website is, Komodo 13 is World Champion of computer chess by by Klaus Besenthal.

8/28/2019 – In Macau (China) the “Chess Events” of the International Computer Games Association (ICGA) came to an end last week. In fact, behind this prosaic name are world championships in three disciplines: the World Computer Chess Championship (WCCC), the World Chess Software Championship (WCSC) and the Speed ​​Championship. At the start were six teams with their programs, including Komodo 13, which won in each of the two main disciplines WCCC and WCSC.

“Founded in 1977 by the Scottish International Master David Levy, 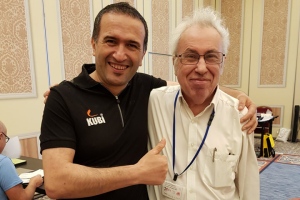 the “International Computer Games Association” is no longer concerned only with chess, but also with, for example, Go. The computer world championship has been around since 1974; It has been held annually since 2002.
Those who have never studied the subject of computer chess will probably wonder what the difference between the World Computer Chess Championship and the World Chess Software Championship is.”

Let me stop here to mention a personal pet peeve. Thanks to an English teacher my stomach churns whenever reading a sentence ending in a preposition. Certainly the sentence should be written, “Those who have never studied the subject of computer chess will probably wonder what is the difference between the World Computer Chess Championship and the World Chess Software Championship.” Chessbase needs an editor. Now back to the usual programming…

“The video below (about one and a half minutes) shows that the championship is not (yet) quite as futuristic as you might think. The operators are flesh and blood

playing out the machine’s moves on a normal chessboard:”

“When we had also sorted things out in the players meeting and after the drawing of lots, the first pairings were announced. You could see how, after the pairings were announced, some programmers rushed to their computers like Usain Bolt and Rambo combined in a single person in order to make the final preparations for the opponents they now knew they would face. I had already done my homework at home and simply remained cool and looked on as the others created a sort of panic.

“My first opponent was no less than the several-time world champion Shredder, a warrior of old which looks as if it is getting on a bit (grey hairs). This time Stefan [Meyer-Kahlen] was in good spirits with his hybrid program and just as in previous years he had come to the tournament with high ambitions. On the other hand, I had prepared a sort of set of marching orders to use against Shredder, well before the tournament. After I had also studied during my work at home the games of my opponents from previous tournaments, I found something from previous years, namely its inclination towards the safer openings. It did not want to take any great risks and especially not at the start of each tournament. Just like a boxer who after the bell first of all starts by feeling out his opponent. Well my motto for Team Komodo is just like my opening book for the tournament: “No Risk, No Fun”.”
https://en.chessbase.com/post/komodo-world-champion-computer-icga-2019

“Hey Joe. It looks like the computer has found something important in the Najdorf.”
“What’s it found, Moe?”
“I dunno, Joe. It cannot tell me…”