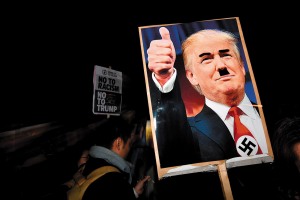 A protest against the election of Trump outside the US embassy, London, November 2016

This is taken from the transcript of the Chris Hayes show on MSNBC. The headline:

Every single Senate Democrat has now signed on to a bill introduced by Senator Dianne Feinstein to bar the Trump administration from splitting up families at the border.Jun.18.2018

HAYES: So then tell me this, what is the endgame here from your
perspective? It seems to me that the White House quite explicitly is
essentially using these children as hostages to try to get Democrats to
give in to a variety of demands they have on restricting legal immigration
as part of a legislative package. Is that something you`re willing to
entertain?

FEINSTEIN: Well, I think that`s exactly right. Of course, we`re willing
to entertain a legislative package if it makes sense but don`t hold
children hostage. I mean, you don`t have to take 2,500 children from their
parents to get support for something. I mean, that`s bizarre and it`s hard
for me to believe that even President Trump would want to do that. It`s
just bizarre.

HAYES: Well, he pretty clearly does want to do it, at least as advisors
do. I mean you have John Kelly talking about how it`s a deterrent. You
have Stephen Miller giving on-the-record quotes about how it`s a deterrent.
Jeff Sessions saying the Romans 13 commands us to obey the laws of man in a
godly fashion. I mean, there does seem to be a part of this administration
that knows what they`re doing.

FEINSTEIN: Well, this is the United States of – I mean, United States of
America, isn`t Nazi Germany and there`s a difference. And we don`t take
children from their parents until now. And yes, I think it`s such a sad
day. People are so upset. I just read a wonderful letter to the editor by
Laura Bush. I can`t believe that this is happening in the United States
and the President insists so we, of course, will do everything we can to
pass a bill which would prohibit this.
http://www.msnbc.com/transcripts/all-in/2018-06-18

Consider the article, It Can Happen Here, by Cass R. Sunstein in the June 28, 2018 issue of the New York Review of Books,. 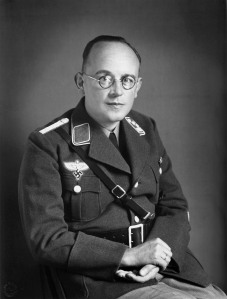 ‘National Socialist,’ circa 1935; photograph by August Sander from his People of the Twentieth Century. A new collection of his portraits, August Sander: Persecuted/Persecutors, will be published by Steidl this fall.

Liberal democracy has enjoyed much better days. Vladimir Putin has entrenched authoritarian rule and is firmly in charge of a resurgent Russia. In global influence, China may have surpassed the United States, and Chinese president Xi Jinping is now empowered to remain in office indefinitely. In light of recent turns toward authoritarianism in Turkey, Poland, Hungary, and the Philippines, there is widespread talk of a “democratic recession.” In the United States, President Donald Trump may not be sufficiently committed to constitutional principles of democratic government.

In such a time, we might be tempted to try to learn something from earlier turns toward authoritarianism, particularly the triumphant rise of the Nazis in Germany in the 1930s. The problem is that Nazism was so horrifying and so barbaric that for many people in nations where authoritarianism is now achieving a foothold, it is hard to see parallels between Hitler’s regime and their own governments. Many accounts of the Nazi period depict a barely imaginable series of events, a nation gone mad. That makes it easy to take comfort in the thought that it can’t happen again.

But some depictions of Hitler’s rise are more intimate and personal. They focus less on well-known leaders, significant events, state propaganda, murders, and war, and more on the details of individual lives. They help explain how people can not only participate in dreadful things but also stand by quietly and live fairly ordinary days in the midst of them. They offer lessons for people who now live with genuine horrors, and also for those to whom horrors may never come but who live in nations where democratic practices and norms are under severe pressure.

Milton Mayer’s 1955 classic They Thought They Were Free, recently republished with an afterword by the Cambridge historian Richard J. Evans, was one of the first accounts of ordinary life under Nazism. Dotted with humor and written with an improbably light touch, it provides a jarring contrast with Sebastian Haffner’s devastating, unfinished 1939 memoir, Defying Hitler, which gives a moment-by-moment, you-are-there feeling to Hitler’s rise. (The manuscript was discovered by Haffner’s son after the author’s death and published in 2000 in Germany, where it became an immediate sensation.)* A much broader perspective comes from Konrad Jarausch’s Broken Lives, an effort to reconstruct the experience of Germans across the entire twentieth century. What distinguishes the three books is their sense of intimacy. They do not focus on historic figures making transformative decisions. They explore how ordinary people attempted to navigate their lives under terrible conditions.

Haffner’s real name was Raimund Pretzel. (He used a pseudonym so as not to endanger his family while in exile in England.) He was a journalist, not a historian or political theorist, but he interrupts his riveting narrative to tackle a broad question: “What is history, and where does it take place?” He objects that most works of history give “the impression that no more than a few dozen people are involved, who happen to be ‘at the helm of the ship of state’ and whose deeds and decisions form what is called history.” In his view, that’s wrong. What matters are “we anonymous others” who are not just “pawns in the chess game,” because the “most powerful dictators, ministers, and generals are powerless against the simultaneous mass decisions taken individually and almost unconsciously by the population at large.” Haffner insists on the importance of investigating “some very peculiar, very revealing, mental processes and experiences,” involving “the private lives, emotions and thoughts of individual Germans.”

The conclusion of the review:

“If the president of the United States is constantly lying, complaining that the independent press is responsible for fake news, calling for the withdrawal of licenses from television networks, publicly demanding jail sentences for political opponents, undermining the authority of the Department of Justice and the Federal Bureau of Investigation, magnifying social divisions, delegitimizing critics as “crooked” or “failing,” and even refusing, in violation of the law, to protect young children against the risks associated with lead paint—well, it’s not fascism, but the United States has not seen anything like it before.

With our system of checks and balances, full-blown authoritarianism is unlikely to happen here, but it would be foolish to ignore the risks that Trump and his administration pose to established norms and institutions, which help preserve both order and liberty. Those risks will grow if opposition to violations of long-standing norms is limited to Democrats, and if Republicans laugh, applaud, agree with, or make excuses for Trump—if they howl with the wolf.”

In their different ways, Mayer, Haffner, and Jarausch show how habituation, confusion, distraction, self-interest, fear, rationalization, and a sense of personal powerlessness make terrible things possible. They call attention to the importance of individual actions of conscience both small and large, by people who never make it into the history books. Nearly two centuries ago, James Madison warned: “Is there no virtue among us? If there be not, we are in a wretched situation. No theoretical checks—no form of government can render us secure.” Haffner offered something like a corollary, which is that the ultimate safeguard against aspiring authoritarians, and wolves of all kinds, lies in individual conscience: in “decisions taken individually and almost unconsciously by the population at large.”

The full review can be found at http://www.nybooks.com/articles/2018/06/28/hitlers-rise-it-can-happen-here/