“The games had begun, the top seeds were comfortably seated on their boards. For the professional star players, it was yet another day at work. 14-year-old Koustav Chatterjee, rated 2288, was the only player waiting anxiously for his opponent. American Timur Gareyev GM, 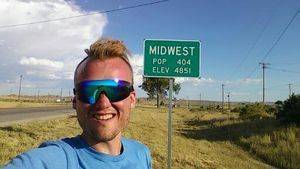 rated 2605, had ‘left’ the official car and had not reached the venue. He had decided that he will come to the venue on his own. The clock was ticking and the walkover time-limit of 30 minutes was fast approaching.
Timur Gareyev did reach the venue, but not on time. He was three minutes late. The chief arbiter Vasanth BH decided to award the point to the young Koustov Chatterjee.”
http://www.chessdom.com/delhi-gm-open-2018-walkover-shocker-for-the-fourth-seed/

The article reminded me of the time a few Chess players were talking about favorite sci-fi TV shows. After naming the original Star Trek

as my favorite, one self-proclaimed ‘legendary’ Georgia player named his.

Upon hearing the name of the show Dubious Dave erupted with, “That’s the difference between you two. Bacon boldly goes where no man has gone before while you (the legendary one) are Lost In Space!” This brought howls of laughter. The legendary one pouted all evening… 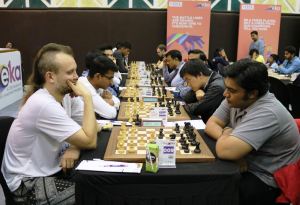 at the 2012 Land of the Sky Chess tournament in the beautiful city of Asheville, in the Great State of North Carolina. It was hours before the first round and I had been talking with the organizer, Wilder Wadford, when Timur came up to speak with Wilder. He noticed the book held in my hand asking if he could look at it.

I gave him the book, he talked with Wilder, then turned abruptly and walked away. I followed, yelled, “Hey you,” or some such, and he turned to gaze at me. After catching up with him I said, “You have my book, sir.” Timur looked flummoxed before saying, “I would like to read it.”
“Who are you?” I inquired. It was then I learned his name. As he was returning the book I said, “It is customary to ask before taking off with someone’s book.” He said, “Yes, of course you are right,” before turning to walk away. Since I had finished reading the book I decided to let him read it, for which he was grateful. Later I noticed Timur sitting in the spectator section reading the book while playing on board one. Someone mentioned later that he had gotten into what looked like trouble against NM Richard Francisco, from my home state of Georgia, while reading the book, before extricating himself from difficulties. Timur went on to tie for first with GM Sergey Kudrin. I enjoyed the conversation we had after the tournament ended, as I have always derived enjoyment from getting into the mind of a top level Chess player. Timur walks to the beat of a different drummer, and I mean that in the best way possible. I liked him immensely. Nothing against “normal” people (whatever “normal” is), but they are not as interesting as we who are, shall we say, “slightly skewed.”

For those of you who do not know, Timur is known as the Blindfold King, and has the website to prove it. (http://www.blindfoldking.com/) One finds this applicable quote at the site: “I close my eyes so I can see.” – Paul Gauguin

Timur and I have something else in common; our brains have been studied. His brain was “loaned” to science before setting the blindfold Chess record.

Next month, Timur Gareyev will play nearly 50 opponents at once – blindfolded. Can neuroscientists reveal how he performs such incredible mental feats?

I urge you to read the article: https://www.theguardian.com/science/2016/nov/03/inside-the-brain-of-the-man-who-would-be-blindfold-king-of-chess-timur-gareyev 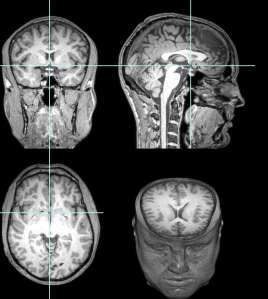 The scans also found much greater than average communication between parts of Gareyev’s brain that make up what is called the frontoparietal control network – used in almost every complex task Photograph: Jesse Rissman

I have participated in several brain studies at places such as the Georgia Institute of Technology, Emory University, and the Veterans Administration. All of these studies involved the memory. My brain:

These studies give one a new way of looking at yourself. Examples:

D. Zachary Hambrick is a Professor in the Department of Psychology at Michigan State University. He received his Bachelors from Methodist College, Fayetteville, NC 1994; Masters at the Georgia Institute of Technology, Atlanta, GA 1997; and became a Ph.D. at the Georgia Institute of Technology, Atlanta, GA 2000, where I became acquainted with him by taking part in studies which led to his earning his Ph.D. Because of the kinds of things he studies I sought his answer to the question of what, exactly, is the state of knowledge pertaining to whether or not learning, and playing, chess can enhance intelligence. Zach emailed me a copy of Educational benefits of chess instruction: A critical review, by Fernand Gobet & Guillermo Campitelli, of University of Nottingham, which, unlike many other studies, can be found online. This study is considered by those in the academic world to be the “last word.”

That it has…It used to be that chess was considered to be a lifetime “sport.” Now when a Chinese GM reaches the ripe old age of thirty he is forced to retire and become a “trainer,” or “coach.” The players have become ever younger, and now one sees a picture of the latest four year old “prodigy” at Chessbase. Check out, Moscow Open: The four-year-old veteran by by Albert Silver. (http://en.chessbase.com/post/moscow-open-the-four-year-old-veteran) The chess world is doing the age limbo; how low can it go?

The introduction continues, “Indeed, schools in various countries (e.g., USA, France, Argentina) offer chess as an optional subject, and some even propose compulsory classes. There is clearly a strong interest worldwide in the potential advantages of chess in education, and the conference from which this book stems is just another example of this interest. Implicit in all these activities is the belief that skills acquired playing chess can transfer to other domains. Is this belief based on well-substantiated evidence? Is the educational value of chess a well-established empirical fact? Or have chess players been blinded by their love of the game into thinking that it offers instructional advantages? In this chapter, we attempt, as objectively as possible, to tackle the question of whether chess is advantageous for general education. To do so, we subject research into the educational benefits of chess to the same rigorous criteria commonly used in academia for evaluating educational research.”

They begin with The question of transfer.

“The question addressed in this chapter can be summarized as follows: Can a set of skills acquired in a specific domain (in our case, chess) generalize to other domains (e.g., mathematics, reading) or to general abilities (e.g., reasoning, memory)?”

The question is simple enough. People have pondered the question for centuries. A well known and popular NM here in Georgia, a former State Champion, and Georgia State Senior Champion, and the only player to hold both titles simultaneously, the sui generis David Vest, has stated that the President of the Georgia Chess Association, Dr. Fun Fong, “is proof positive that expertise in one area does not translate into expertise in another area.” I wholeheartedly concur with his astute assessment of the situation in regard to the POTGCA. He may be a fine emergency room doctor at Emory University, but as POTGCA he leaves a great deal to be desired.

The authors continue, “This is an old question, which, for a long time, was answered positively; for example, for centuries, it was accepted without dispute that learning Latin or geometry would train the mind and prepare it to cope with other topics. However, when, for the first time at the beginning of the 20th century, the question was studied scientifically, the conclusions were rather different.”

Inquiring minds want to know, and not just accept that which is offered. The more highly educated the people the more questions asked, and the generations after the second world war are the most highly educated in history. There are more inquiring minds than ever before in the history of mankind. So when, for example, there are constant problems with the organization of the GCA; when there are problems with every tournament organized by the GCA; and when members of the GCA board resign and there is no accountability by the President of the GCA, who continues to stonewall in the same way as did US President Richard Nixon during what came to be known as “Watergate,” people begin to question. The two members who resigned have not answered my email entreaties and have chosen to remain silent. This has caused rumors of things like financial malfeasance, illegal stipends paid out, and hush money, to run rampant.

The paper continues, “A different view of transfer emerges from the psychological study of intelligence. Researchers in this field believe that one or a few transferable abilities form the basis of intelligence. These abilities are seen as general, at least within verbal or visuo-spatial domains, and are supposed to apply to a variety of domains (see Sternberg, 2000, for an overview). However, these basic abilities are also seen as innate, and thus not amenable to improvement through practice.”

“In spite of these disagreements about the nature of transfer, some results are clear. In particular, recent research into expertise has clearly indicated that, the higher the level of expertise in a domain, the more limited the transfer will be (Ericsson & Charness, 1994). Moreover, reaching a high level of skill in domains such as chess, music or mathematics requires large amounts of practice to acquire the domain specific knowledge which determines expert performance. Inevitably, the time spent in developing such skills will impair the acquisition of other skills.” (Emphasis is mine.)

Fortunately for Dr. Fong, he has already developed the skills needed to become a ER Doctor. The Georgia chess community can only hope the Doctor decides the time he is spending on chess will impair the acquisition of other skills he may need to become even better at his day job and leave the administration of chess in Georgia to those who have a clue as to what to do.