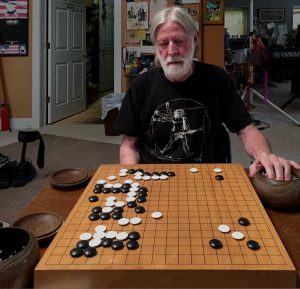 Born in Pasadena, California he grew up in Denver, Colorado and lived for many years in Hopewell Township, NJ. He received a BA in 1972, and a Ph.D. in 1978 from Princeton University. He was a member of the United States Chess Federation, the American Go Association and the Recording Industry Associates of America. He was the IT Director for the Atlantic Trading Company from 2002 until the time of his death.

Richard was known for his passion for music; the game of Go, which he played at a 2 dan level; and his joy in skiing the black diamond trails of Colorado with his brother. He enjoyed fishing and hiking on his trips to Colorado. He had 30 years of Sunday morning hard fought racquetball games with a dear friend. He was a skilled competitor with a generally superior ability at games of most sorts. His talented musicianship on guitar, violin and piano was expressed by the musical bands he formed and played with over his lifetime. He was known for his warmth, kindness, quiet sense of humor and his easy smile. He had a gift for teaching, whether it was a game, a musical instrument or a physics theory. He had great love for his family as well as the numerous dogs who were valued companions throughout his adult life. He is terribly missed.

Condolences can be sent to his widow, Joanne Sheehan at joanne.sheehan@pobox.com.
photo by Phil Straus