During that time the club has met on the first and third Tuesday evening of each month. The first location was in the Church of Decatur Heights, which was a nice location because of the large meeting area, and better yet, ancillary rooms for parents to use while their children played Chess. Unfortunately, times changed and as the older people left they were replaced by new people, some of whom could not understand using the space for anything other than worship a nebulous entity that may, or may not, be. Although the Ironman’s parents had attended the church Tim preferred playing in the fourth round of a weekend Swiss tournament. “Bacon,” he would say, “Chess is my church.” The old pastor left and was replaced. The club continue meeting, but there was this one particularly nasty “church lady,” no doubt filled with the spirit, who wanted what she considered the blasphemous Chess players eradicated. The woman, may she burn in Hell, got her wish and the club had to be moved. The new location was the North Dekalb Mall. For many years the club met in the food court, which was a trip, what with all the passersby and attendant noise. Still, it was free and you cannot beat free, especially when it comes to Chess. This lasted some years before the mall began losing tenants. Near the end there was only one restaurant open in the once bustling food court, but still the Ironman CC continued meeting twice a month. Then there were none, and the mall stopped turning on the main lights. There was still a modicum of light and the ICC continued meeting. The roof began leaking, but still the ICC met. One father would bring his three boys all the way from the north side, which was something because the Ironman began at six pm. The traffic that time of day is a nightmare on a good day. People new to Chess would somehow find the club. GCA board members would come to play, along with absolute beginners and those of Master strength. The Ironman Chess Club was certainly sui generis.

Then one evening an obviously mentally deranged woman screamed and hit her child, which was in a stroller, and stayed there most of the evening, screaming and slapping the poor child. The Ironman lost more than several regulars after that meeting. The woman caused the Ironman to move into the back room of Challengers, an game store owned by a nice fellow, Tony, who had actually played youth Chess while in school. There was enough room for a couple of dozen players in the back room, which was used for gaming and storage.

The last meeting of the Ironman CC held at the North Dekalb Mall was March 19, the second Tuesday of the month. For obvious reasons only a few people attended. I was not one of them. The mall finally closed and could not meet this past Tuesday, April 7, 2020. Yet there was a meeting, of sorts, of the Ironman Chess Club…

After having mentioned another game to show the Ironman earlier I had found another, making two games for me to “present” the Ironman. Tim said, “The Ironman may not be meting tonight but I intend on sitting down at the board to study Chess. How about you showing me one of those games you said you wanted me to see tonight, Mike?” Wa-la, a meeting of the Ironman CC!

Many of, if not most of you readers may have seen this game, but it was not in the Ironman’s purview. I urge you to play over the game the old fashioned way, on a board with pieces while covering the moves in order to see the beauty of the game, which would have made Mikhail Tal proud. Look at it from the black perspective in an attempt to find the moves made by GM Vitaliy Bernadskiy. When first starting out in Chess the Kings Indian Defense was my main defense against 1 d4, because Bobby played the KID. I liked the way black could use a slow build up to attack white. Later I moved on to the Grunfeld, before moving on to the Dutch, specifically, the Leningrad Dutch, as regular readers must certainly know… 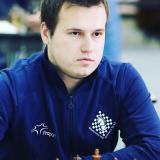 Another Game of the Year? | Narciso Dublan vs Bernadskiy | Lorca 2019