An Analogue Creature Floundering in a Digital World

In chapter five, Cyborgs and Civilians: Algorithms are puppeteers, Dr. Rowson writes, “I was not yet aware that I would be a father the following year, but it was in that life context of beginning to detach from the chess world that I had the privilege of helping world champion Viswanathan Anand prepare for his match with Vladimir Kramnik. 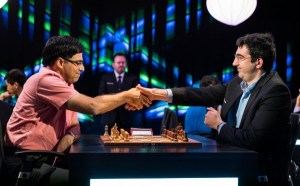 When it became clear that the chess world was going to get the contest it wanted, I offered my services to Anand. I was a strong middleweight Grandmaster rather than a heavyweight, but analytical help is about more than chess strength. Unlike many hired guns, I had some lateral perspectives on chess, an easy rapport with Vishy, and I genuinely wanted him to win. The plan was to offer a few opening ideas for him to develop and some speculative psychological insight for him to ignore.”

“I was also eager to participate in preparation at the very highest level. I had no experience of World Championship preparation, but I had red descriptions of other matches from the seventies, eighties and nineties. Most of those matches were in pre-computer or early computer days, and what I assumed might be a slight shift in emphasis was much more fundamental. I imagined that the training would be part of over-the-board analysis session, part inquiry into the psychodynamics of competition, and part Rocky IV training montage, where Sylvester Stallone lifts huge blocks of wood and runs through the snow.

I expected the training to be roughly 20 per cent physical, 20 per cent psychological, 30 per cent on the computer. In fact, the work was about 95 per cent on the computer, and virtually all of that time was spent trying to help Vishy form new ways of achieving good positions in the opening phase of the game. Just as finding needle in a haystack is easy, if you have a metal detector, finding an important new chess move is easy, if you have the right software.”

“To give an illustration of how far the experience deviated from my expectations, I was in two minds about whether even to bring my computer to the training (a basic Sony Vaio laptop I had used for years). Very soon after arrival, before a pawn had been pushed, Vishy asked me: ‘How many cores do you have, Jon?”
‘Oh, I’m not sure,’ I said, which was clearly not a reassuring answer. Vishy talked me through finding the relevant details on my computer. When he saw it on my screen he paused ruefully and said: ‘Oh, Jon has only one core.’ Kasim (Rustam Kasimdzhanov) 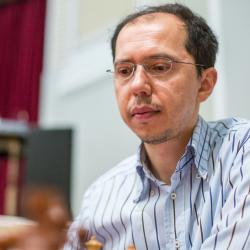 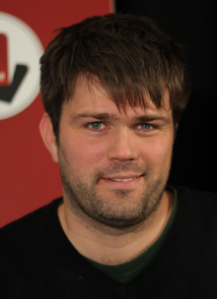 looked at each other, a little troubled. I had no idea what was going on, but it was as if I had arrived at the border to a new country, only to learn that my passport was not valid. Vishy looked mildly ruffled but said it did not matter, because it was possible to connect to online analysis engines – a mysterious notion at the time because I had never done that before, but is was a source of hope too. Alas, I then had painfully mundane problems relating to getting the wi-fi to work, and realized I was slowing the team down. I maintained a professional face, but inwardly I was approaching one of those childlike moments of absolute humiliation.”

There follows a description of what is a core, and what it does, culminating with, “It was only because I was literally up to speed with the others that I could enjoy several productive days at the camp. But I will never forget that feeling of being an analogue creature, floundering in a digital world.”

The author felt that way because, “The work however, happened as the four of us sat around the same table in our on worlds for several hours in a dimly lit room late into the night. The scene was like a Silicon Valley incubator house: humanoids with transfixed faces lit by the glow of computer screens.”

“Mostly we followed the best ideas according to the analysis engines with what Vishy joked was ‘space-bar preparation’ – when the analysis engines are synchronized with the position you are navigating, rather than move the pieces on the screen with your mouse, you press the space bar to keep the engine going down the line it deems to be most accurate for both sides, while watching it unfold on the position on the screen. It is a kind of thinking, I suppose.”

I found this rather sad because it sounds more like something out of a dystopian science fiction novel than real life. Some of my most interesting and enjoyable moments with Chess were those spent analyzing positions with one, or more, players. The arguments were exuberantly endless, and elevating. Maybe the variations were far from best but the interaction with fellow humans was wonderful. Something may have been gained with the coming of the digital age, but something much more important has been lost, never to return to the Royal game. As IM of GM strength Bois Kogan was fond of saying when looking at one of my games, “This is NOT CHESS!”