The 2019 Mr. Phillip Taylor GA State Championship begins in a month, May 17 through May 19, 2019. Who is Mr. Phillip Taylor? Chess tournaments in Georgia have usually been named after someone who has left the board. Since I have been around about as long as anyone involved with Chess in Georgia and was unfamiliar with Mr. Taylor, I reached out to former POTGCA Scott Parker with an inquiry. Mr. Parker replied,

I believe it is because of a financial commitment, but I don’t know the details. If you want to email the full board to see who might know use gcaboard@georgiachess.org. That reaches all board members. And Mr. Taylor is very much alive and kicking. That much I do know.

After forwarding the above to every board member only one reply was received, from 2nd Member-at-large Anna Baumstark, who wrote:

Hi,
I wasn’t on the board for the last State Championship, but I believe that Phil donates to the GCA each year to help defray the cost of the
tournament.

The 3-day schedule has two games, the first and third, to begin at 7:30 PM. Since I will not again attempt playing Chess at night in a tournament that would mean I could take two half-point byes, which are allowed, but only in rounds 1 thru 4 (limit two) and must request before Round One, with (absolutely) no changes afterwards!

I then found the website of the hotel in which the tournament would be played, the Radisson Atlanta Northwest, located at 1775 Parkway Pl SE, Marietta. This means the playing site is not accessible via MARTA, the Metropolitan Atlanta Rapid Transit Authority, the absolutely best way to get around Atlanta because the train moves when traffic comes to a halt. Although there is a bus system in Cobb county, where the city of Marietta is located, word on the street is it pales in comparison to MARTA and the Gwinnett county bus system. It is well known the traffic situation in Atlanta is horrible. The northern part of Atlanta known as Buckhead has recently considered the possibility of charging people who drive into that particular part of the city in order to relieve congestion. One official said, “Ninety percent of people who work in Buckhead do not live in the city.” I lived and worked in what was known as “The Head” in the 1970’s and 80’s when it was a community and there were affordable places for employees to live. Now only the wealthy can afford to live in “The Head.” As Atlanta continues to grow more people will utilize only public transportation like many people who live in New York City and never own, or even drive, a car. This should be taken into consideration by the GCA board.

A search for comments by former quests of the Radisson Atlanta Northwest, followed. Phil G. from Knoxville, TN., posted his review on 3/30/2019, giving the Radisson only one star out of a possible five, writing, “The only reason I gave this one lace a 1 star is because I couldn’t give it NEGATIVE stars.
This is the worst hotel I have ever been to. We were in the area for a Baseball tournament and our entire team booked here. One room had bugs in the bed and throw up in the floor, literally chunks of vomit in the middle of the floor. One room had the water running in the tub and it wouldn’t turn off. We had a total of 9 rooms and of the 9, eight of them didn’t have towels when we checked in. If the other area hotels weren’t booked we would have went somewhere else. Out of the 9 rooms, 7 had to change rooms because of filth or because something didn’t work, shower, TV, door locks. When our kids went to swim in the pool, we asked the front desk for towels and the said “get them from your room”, after we just told them there were NO TOWELS IN THE ROOMS!
The hotel employees acted like none of this was important and offered NO compensation for the dirty rooms and bad service. The hotel lobby was full of leaves and the trash cans were over flowing. The hotel is next door to a really trashy nightclub, might have been a strip club by the looks of the way people were dressed going in. Sharing the same parking lot as a night club lead to coming out to your car in a parking lot covered in trash.
DONT STAY HERE, save your money. This is NOT a typical Radisson.”
Phil G.
Knoxville, TN

So many things went wrong with this stay and I don’t know where to even begin except to say that I never in my life stayed at a Radisson Hotel nor will I again. Oddly enough, I encountered no service issues during my stay … it was just the overall grime and yuck factor of this hotel and quite frankly it’s clientele which turned me off.

When we pulled in, there were some shady characters in the parking lot. These folks did not look like the type who would pay $120 per night for a hotel. They looked more like vagrants. However, low and behold they were staying there. Also, there is a REALLY sketchy dance club next door called Tiger Tiger. Imagine any gangstah rap video you’ve ever seen before and that is who frequent this dance club. They must offer deeply discounted rooms on an app because the hotel is filled with people staying there who are going to the club next door.

The hallways looked like a combination of a frat party/rap video. People were screaming in the hallways, walking around with red solo cups and playing loud music. The rooms have connecting doors and the walls are pretty thin, so I could hear everything in the next room like it was in my room. Loud teens and 20-something year olds everywhere. It was like staying in a college dorm room.

The hotel has seen better days … the windows to the room were crusted with white stains and you couldn’t really see out. There was a sliding balcony door which to a small balcony with no furniture which was shared with the room next door. It looked like the floor could give out at any moment.

To say the carpet was old and filthy would be an understatement. I wore shoes the whole time in the room. The overall feel of the room was a hotel from the 2003-era. Same furniture I remember, draperies, color scheme as early 2000/late 1990s hotels. The lobby seems to be where they put their money … it’s all brand new and beautiful. They have an odd little restaurant/bar which looks like it has never been cleaned and by closing time at 11 p.m. on a Friday, they were out of every beer on tap.

Next door, the club music booms until 3:30 a.m. and if your room is located on the front side of the building facing the parking lot, you’ll hear it all night long through your window. There is no escaping the sound of booming club music, so if you are a light sleeper … you will be a non-sleeper. After the music stops, you then have drunks in the parking lot making noise which comes up into the hallways and rooms.

It seemed like there were a LOT of problems with guests that were do to the overall shadiness of those who stayed there. Often we would hear people yelling at the front desk people … and twice we noticed police cars pulled up outside the hotel. This was during a 24 hour long stay.

Avoid this hotel unless you are going to get your groove on at Tiger Tiger … or really miss going to college in the 1990s in which case, staying here will be a trip down memory lane. The only reason I left 2 stars is because the front desk staff was helpful and friendly. 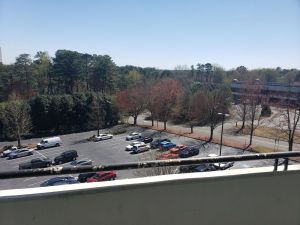 Parking lot from balcony minus the shady vagrants

Clubs right next door equals no sleep due to loud music

This hotel does not sound like one conducive to playing good Chess, or obtaining a good night’s sleep. After doing due diligence I have decided against playing in the event. It would seem that with the additional money donated to the tournament by Mr. Taylor a decent venue could have been found.

I do not know who is responsible for the decision to have the tournament at this particular hotel, especially considering the plethora of hotels in the greater Atlanta area, but it is obvious someone, or some group of people did not do their due diligence. I do not know why many Chess tournaments in the greater Atlanta area have been, and obviously continue to be, held in second, or even third rate, run down hotels, but I have played Chess in Atlanta since 1970 and, unfortunately, this hotel is not an exception. For example, the legendary Georgia Ironman, Tim Brookshear, who has been playing almost as long as this writer, likes to tell the story of the first Sweat-box Open, which was held at the Biltmore hotel in downtown Atlanta during a hot summer and there was no air conditioning. Sweat-box number two (and 2a, 2b, 2c, etc.) were held at the House of Pain, aka, The Dump, which was the old Atlanta Chess and Game Center. The Dump was known for an air conditioning system held together who knows how by Longshot Larry, defying law, rules and regulations, and the law of physics, that was down as much as it was up. When a window unit stopped putting out cold air it was usually replaced by a much smaller unit. The latest incarnation of the sweat-box Open was at the North Dekalb Mall a few summers ago when a tournament was played completely sans AC. The stench overwhelmed the senses while making eyes sting.

Having participated in Backgammon tournaments and visited both Scrabble and Bridge tournaments in the Atlanta area which were held in good conditions in nice hotels I cannot help but wonder why it is only Chess tournaments in Atlanta that have had such problems.