The President of the USCF board, Allen Priest, started a new thread on the USCF forum under All Things Chess, titled: World senior team 50+ (http://www.uschess.org/forums/viewtopic.php?f=23&t=24693&st=0&sk=t&sd=a).

It was no surprise that the POTUSCF was the first to reply as he weighs in on almost everything on the forum.

“Well you can organize one – it is an open tournament. As many teams from any country can enter as wish.”

Maybe another person on the forum would have been surprised by the flippant remark but I was not because of having previously interacted “up close and personal” with Allen at a Kentucky State Championship. He allowed the tournament to begin without lighting because of no electricity after turning a deaf ear to the players.

My friend Michael Mulford replied with the following post:

Did US Chess fund the winning team? If they did, a more accurate answer might be US Chess did not budget to fund one and no self-funded team emerged”.

We has a stipend for one team for 2018 and 2019 based on our invitional list rules. Again these are open events. Any team that wants to enter certainty can.

Allen wrote:
We has a stipend for one team for 3018 and 2029 based on our invitional list rules. Again these are open events. Any team that wants to enter certainty can.

Ignoring the obvious typos on the years, would it be fair to say that we have budgeted for stipends for one team. That team could have been either an over 50 or an over 65 team, based on the invitational list rules?

And, as usual, Allen got the last word:

Sorry. The phone keyboard is hard to use. We budgeted for one set of stipends for two tournaments that occurred during a single budget year. The original motion didn’t address anything about divisions of the event. So, if the invitational list yielded a 65+ team that’s who would have received the stipend.

At this time there are twenty four posts on this particular thread and sixteen, or two thirds, of the posts were made by the POTUSCF. Does this make you think of the POTUS and his propensity for firing salvos via Twitter?

In the March issue of Chess Life magazine Allen writes about US Chess Affairs/ News for our Members in something named, ACROSS THE BOARD. He begins, “Not many people get Chess Life to read a missive from the president of the organization. I understand.”

I’m thinking, “Well, at least the man understands something.”

Allen also writes, “But we all share one thing-an interest in a grand game.”

And I’m thinking, “Interest?” Then I realize the difference between Allen and me is a chasm because I LOVE the Royal Game! I have played Chess seriously since 1970, and if you go back to when my father taught me the game, 1966. I have read extensively about the game and have followed it even when spending most of my time playing Backgammon professionally. I have played Chess in USCF rated tournaments in twenty five different states, more than any other native born Georgian. I have played Chess in seedy dives, such as the legendary Stein Club on Peachtree street in Atlanta, Georgia,

and opulent places such as the Biltmore in Asheville, North Carolina. (https://www.biltmore.com/)

Allen has played all of forty five USCF rated games IN HIS LIFE!

Allen is rated 701. Allen has NEVER BEATEN A PLAYER WITH A RATING CONTAINING FOUR DIGITS!

I asked myself the above questions after reading 25 Questions for Steve Doyle: A major figure in American chess relates his lifetime experiences in characteristically upbeat fashion, by Peter Tamburro, in issue #3 of the American Chess Magazine recently. 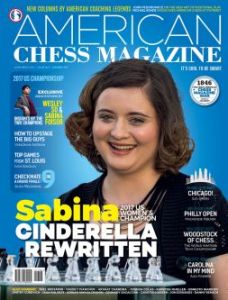 This question was posed, “How has the USCF fared over the years and what do you think its prospects are for the future? Now that there is a search for a new executive director, what qualities should they look for?”

The former President of the USCF, Steve Doyle

gave this answer: “The huge savings built up in my term were then the saving life blood for a series of incompetent boards – and that followed with very weak leaders in charge. They ran the book business into the ground., squandered resources and lived off the savings account. Finally the building in New Windsor was sold, the book business outsourced, savings used to pay off massive debt and the operation moved to Tennessee. Now new people are coming forward, the entire membership votes on officers and we have a 501c3 status. All positive moves. Of couse, millions wasted along the way.”

The current president of the USCF, Allen Priest, is, fortunately, on his way out. In his aforementioned column he wrote, “Many of our members are not particularly interested in the governance of US Chess. Few, if any, join to be involved in governance. I know. I was the same way.”

If only it had stayed the same way…

I am now one of the members who is “…not particularly interested in the governance of US Chess.” Frankly, at this point in my life I could care less as it is time for me to leave the future to those whom it will affect.

The fact is that Allen Priest, like all other Chess politicians, will be judged by history. Will he be considered a “very weak leader in charge?” Will history be kinder to him than those posting on the USCF forum have been to this point in his tenure? Only time will tell…

My first thought upon seeing the headline was when I was a boy the POTUS, John F. Kennedy, was cheered wherever he went all over the world.

The president dismissed reports that he ordered the firing of Special Counsel Robert Mueller as “fake news.”

The article caused me to recall a song from those former days when the rest of the world cheered US.

It has been said a picture is worth a thousand words: