As a young boy I was a baseball fanatic. It was really BIG NEWS when the Milwaukee Braves announced they would be moving South to Atlanta in the middle of the 1960’s. Atlanta-Fulton County Stadium was built and the Braves Triple A team played there in 1965, the year before the team left heading South. Atlanta was not an international city then, but with a new airport and a Major League Baseball team, it was heading in that direction. It was a time of racial strife and discord because the times they were a’changing. Black folks were marching in the streets and folks of a different, lighter color, found it threatening. Young people who were going to the stadium to watch Mr. Henry Aaron swing his hammer, then going home to listen to groups with the Motown sound, like the Four Tops and The Temptations, not to mention the man called the “Black Bob Dylan,” Curtis Mayfield, were having trouble understanding just what it was they were supposed to hate about those of a different color. Then Atlanta mayor William B. Hartsfield responded to the the bigots by calling Atlanta “a city too busy … to hate.” (http://crdl.usg.edu/export/html/ugabma/wsbn/crdl_ugabma_wsbn_42211.html?Welcome) Some Caucasians embraced Dr. Martin Luther King, Jr. Some did not…but the times did change, and now Atlanta is an international city, known all over the world for many reasons such as the CNN and the 1996 Olympic Games and now the CDC at Emory University. No pot has melted more than the home town I share with Dr. King.

An article by Paul Barchilon, “Atlanta Celebrates MLK Day with Stone Mtn. Hike,” on the American Go E-Journal vividly illustrates just how much Atlanta has changed. “On Martin Luther King, Jr. Day 2015, the Atlanta Go Club and the Atlanta Chinese Go Association organized a hike up Stone Mountain, in memory of Dr. King, who referred to the mountain in his I Have a Dream speech — “Let freedom ring from Stone Mountain of Georgia.” Feijun (Frank) Luo 7d, led young kids to play go at both the shelter in the middle of the mountain, and the pavilion on the top of the mountain. “The kids greatly enjoyed mountain climbing, playing go during the trip, and the spectacular view on top of Stone Mountain,” said Luo. Brandon Zhou 4d, who won the Ing Foundation’s World Youth Goe Qualifier in the U.S. junior division in 2014, was among the participants. “Playing go on Stone Mountain is a good way to pay tribute to Dr. King,” said Luo, “go is a board game that best displays equality and freedom — it represents equality because every stone has an equal value by itself, and it expresses freedom because playing styles are unrestricted and free.” (http://www.usgo.org/news/page/2/) 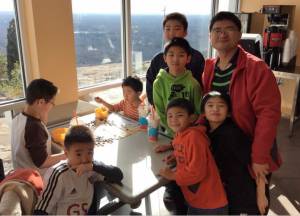