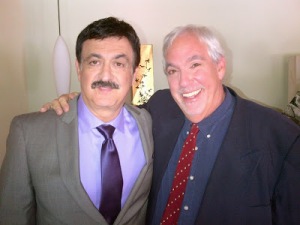 argues that upon death no one really dies. In the latter half, he presented his research and information that he says he obtained by interviewing folks (including many celebrities) after they have passed away such as Bill Paxton,

He contacts the deceased by working with the medium Jennifer Shaffer, and this includes the late hypnotherapist Michael Newton, whom he studied with and documented his work on the life between lives. From the after-death state, Newton shared advice with Martini for those who wish to converse with the departed. He suggested simply saying the name of a loved one, and addressing them in the present tense as though they are there with you. “When you hear the answer before you can form the question, then you’ll know you have a connection,” Newton offered.

Through Shaffer, Bourdain revealed that rather than food, he misses the interpersonal connections he had with people, and he recommended the practice of meditation (something he did not engage in when he was alive). Martini often starts his communications with the departed by asking who was there to greet them when they crossed over to the Other Side. The recently deceased Microsoft founder Paul Allen

told him he was met by a football player who had taken his own life. Among the many celebrities Martini says he’s communicated with, JFK

revealed to him that the Mafia was the most to blame for his assassination, and rather than planning it, the CIA simply looked the other way.