Because the World Human World Championship has been, for the most part, sort of boring I have spent a considerable amount of time watching the games of the concurrent World Senior tournament. While so doing I have listened to some of the patter from Yaz, Maurice, and Jen,

in the event some kind of action breaks out on the board between Maggie and Fabi. Although there were a few games worth following, the fact is that much of the time has been spent with special guests whom drone on and on until I simply can no longer stand it and I turn off the sound.

During one of the obviously much needed breaks for the human commentators filmed “fireside chats” have filled the time, and they have been much appreciated because they have been far more interesting than the non action filled WHCC. I have lived through much of the history that was discussed but still found it interesting, while thinking how wonderful it must be for younger Chess fans who know little, if anything, about the history of the Royal game.

During one segment the topic was Magnus Carlsen and I believe it was Yasser and Maurice discussing the performance of Magnus in one of the Sinquefield Cups. I believe it was Yasser who mentioned a last round game in which Levon Aronian offered Magnus a draw which would win the tournament for Carlsen. Magnus refused the offer and that made a huge impression on Yasser. I seem to recall Yaz saying something about it telling him what kind of player was Mr. Carlsen.

What happened to that Magnus Carlsen? Who is the imposter taking his place in this World Championship?

Reading some of the comments Magnus made before the tournament, such as lamenting the fact he does not have the energy he had a few years ago, caused me to wonder if Magnus is simply burned out and needs to take a long break from the game. His play over the past twelve games reminded me of something heard when young. “Listen to what a man says, but watch what he does,” my Mother was fond of saying.

Magnus has been playing “tired” Chess for some time now. Maurice mentioned the fact that when it came time for Magnus to “dig deeply into the position,” Magnus was taking only a few minutes before producing a move. There is always a reason this happens to any Chess player. We can only speculate until Magnus produces the reason for his inability to concentrate and “grind.” A short time ago Magnus was known as the ultimate “grinder” because he was willing to sit for hour after hour grinding out a win from a small advantage. In the last real game of the current world championship match Magnus was incapable of grinding out a won game.

I spent an inordinate amount of time today reading, watching and listening, to commentary about game twelve.

After the players were interviewed by GM Daniel King,

and answered questions from reporters, the strongest female Chess player of all time, Judit Polgar,

said this to her co-host Anna Rudolf 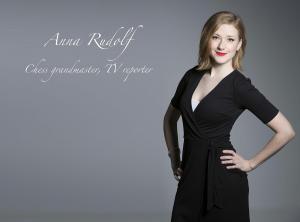 about eighteen minutes into the film below. “In his (Magnus Carsen) head he was not ready to win today’s game. He just wanted to move on to the playoffs and I think it can cost him the crown because this mistake will maybe will not be forgiven to him. That he did not try/ He did not want it anymore to win in classical game because this shows something we’ve never seen before by Magnus, and it’s not a good sign necessarily.”

Decades ago a young female Chess player to whom I had given lessons, Alison Bert, was about to battle a legendary Georgia player. She came to me and asked, “Who will win?” I thought for a few moments because at that time I considered the man a friend. The reply was, “The one who wants it the most.” She walked to the board with a purpose and beat that man down.

Magnus Carlsen is a great Chess player, one of the best of all time. The Magnus who is playing in this match is a shadow of the younger Magnus, and Carlsen has said as much recently. Yet Fabiano Caruana was unable to beat an obviously weakened Magnus Carlsen once. That fact attests to just how great is Magnus Carlsen.

Fabiano Caruana showed nervousness in the first game but Magnus was unable to finish him off. The same thing happened in the last game of the real match, the so-called “classical” games. The World Human Chess Championship is there for Caruana’s taking. To take the title he must want it more than Magnus.

I just finished reading the new article on Chessbase,
“Explaining male predominance in chess” by Robert Howard
(http://en.chessbase.com/post/explaining-male-predominance-in-chess). Judging from the few comments posted Mr. Howard has started a firestorm. He writes, “If the male predominance in chess was due just to social factors it should have greatly lessened or disappeared by now.” He concludes with, “This conclusion is unpalatable to many but it is best to acknowledge how the world actually is.”
Ruth Haring is the President of the USCF. She sent me this email Sat, May 24, 2014:
Michael,
Hi again. I do have strong opinions, but the reason I do not blog is that I am too busy to keep up.

What do you suggest ? I could write something.

I view it as a statistical problem. When we get 50% women tournament players we can expect parity. I am working to encourage more women to play so as to increase the numbers, and thereby representation at the highest levels. If you take a random 4% of a population, you might find women tournament players outperform that random group.
Regards,
Ruth
Robert Howard simply refutes Ruth Haring. Actually, what he does is blow her thinking out of the water!
I lived with two sisters and a mother and from that experience I learned there is a difference between the sexes. All I have written is that there is a difference between males and females. I have always thought it a wonderful thing. I cannot imagine what kind of place this would be if we were all the same.
The world of chess has changed because of the influx of girls. Because of the vast number of children there are more women involved with chess because of what is now called the “Chess Mom.” When I write something like this there are those who mistakenly think I am negative when it comes to female participation in chess, when all I am doing is pointing out a fact. Women bring something different to the table. I am not making any value judgement, just stating a fact. I have no idea whether or not it is a good, or bad, thing. I urge you to read the article on Georgia Chess News, “From the New GCA Director of Communications” by Laura Doman, the new board member (http://georgiachessnews.com/2014/06/01/from-the-new-gca-director-of-communications/). This more than anything I can write illustrates what a woman brings to the chess world. Make no mistake, I mean this in a positive way. Women bring a social aspect to chess that men lack. I saw this when I played backgammon, where the percentage of women was exponentially larger than in chess. Yet the fact is that the women were not as strong as men. For example, the two strongest female players in Atlanta were Kathy and Debbie. They both won a fair number of Monday night tournaments. The matches were only seven points and the duration of the tournament was only three or four hours. But when it came to the two or three day weekend events, and longer matches, neither of them ever did well. I played in the World Amateur Backgammon Championship in Las Vegas twice, and female players never fared well. Granted, this is anecdotal evidence, but it is all I have to give.
When men are in a room with other men and a woman enters the dynamic is changed. When I first began playing chess the Atlanta chess club met at the downtown YMCA on Lucky street. One night two women entered. They were the first women I had ever seen at the club. They were treated rudely and left. I left my game and went outside to apologize even though I had not been involved. One was terribly upset, but the other smiled and thanked me. We played later, but not chess! That was the last time I saw a woman at the ACC. Years later a girl, Alison Bert, began playing chess. I gave her a few lessons, not for money, as is the case today, but because I liked her and wanted to help her. I must have done a good job because Alison beat me in a USCF rated game.
When it comes to women being involved in anything, I always think of something I read about the advantage Western civilization has over those of the Muslim faith because the latter suppress women. They do not allow women to bring anything to the table, and are therefore missing half of their being. Even if it is true that women are not, and may never be, as good at playing a game, it does not mean that what they bring to the board is not just as valuable as what a man brings. Not to mention the fact that they look so much better bringing it to the table!