An art gallery in Portland is being blasted online for prominently displaying an image of President Donald Trump being decapitated.

As part of their “Fuck you Mr. President” exhibit held on July 13, One Grand Gallery showed art from leftists still suffering Trump derangement syndrome more than 18 months after his inauguration. 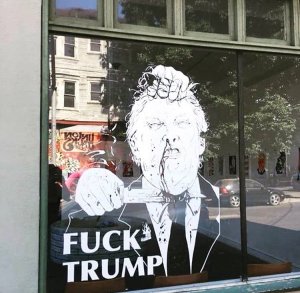 A June 4 call to artists for the exhibit is exemplary of the gallery’s hatred for the sitting US president.

“How far we’ve come since our Bernie Sanders show from the fall of 2016,” the post reads.

“[Trump’s] election has brought out the worst in American citizens, exacerbating political divides, and we have been devastated watching the unfortunate turn of events since” his inauguration,” the now-deleted post read.

“We hate the president and want to let him know,” reads another call to artists.