The United States has vaccinated more than half of its adults against Covid-19, but it could be months until the country has vaccinated enough people to put herd immunity within reach (and much of the world is still desperately waiting for access to vaccines).

Places with rising vaccination rates, like the United States, can look forward to case numbers coming down a lot in the meantime. And sooner than you might think. That’s because cases decline via the principle of exponential decay.

Many people learned about exponential growth in the early days of the pandemic to understand how a small number of cases can quickly grow into a major outbreak as transmission chains multiply. India, for example, which is in the grips of a major Covid-19 crisis, is in a phase of exponential growth.

Understanding exponential dynamics makes it easier to know what to expect in the coming phase of the pandemic: Why things will improve quickly as vaccination rates rise and why it’s important to maintain some precautions even after case numbers come down.

Exponential decay will cause infections to plummet 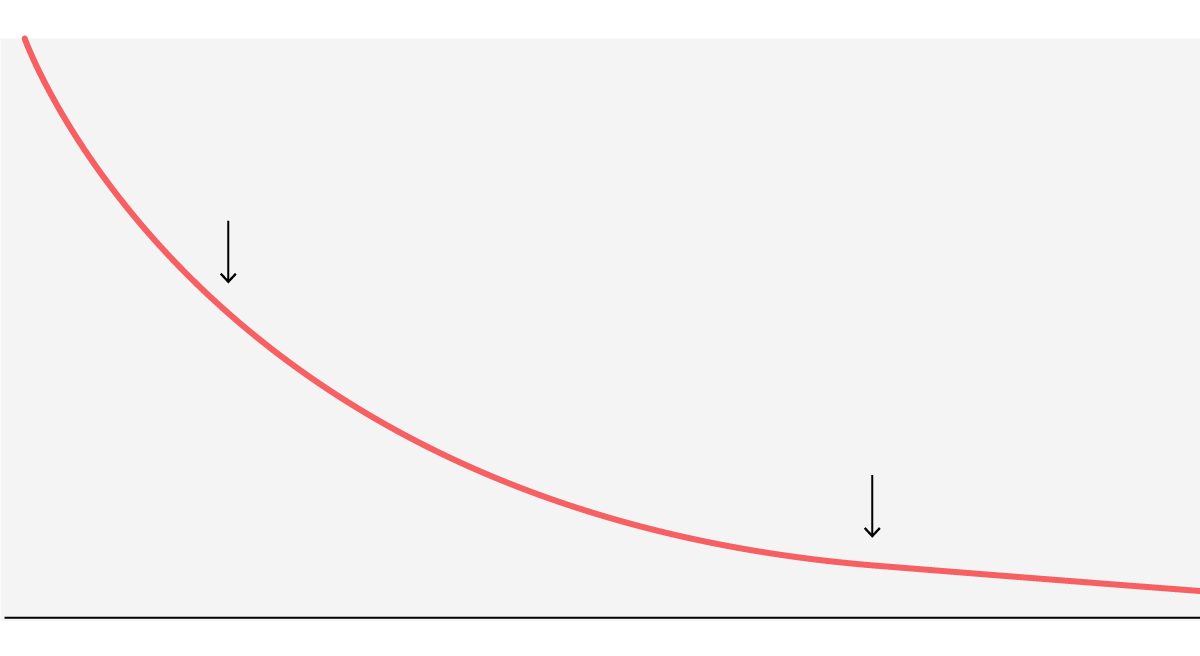 Every case of Covid-19 that is prevented cuts off transmission chains, which prevents many more cases down the line. That means the same precautions that reduce transmission enough to cause a big drop in case numbers when cases are high translate into a smaller decline when cases are low. And those changes add up over time. For example, reducing 1,000 cases by half each day would mean a reduction of 500 cases on Day 1 and 125 cases on Day 3 but only 31 cases on Day 5.

The end of the pandemic will therefore probably look like this: A steep drop in cases followed by a longer period of low numbers of cases, though cases will rise again if people ease up on precautions too soon.

Reaching herd immunity is a key goal. It drives cases toward zero by slowing the spread of the virus through a combination of vaccination and infection-acquired immunity to maintain exponential decay — even as society resumes normal activities.

Dr. McLaren is an associate professor at the University of Maryland, Baltimore County, who studies policies to combat infectious disease epidemics, including Covid-19.

Yo, check it
1 for Charlie Hustle, 2 for Steady Rock
3 for the forthcoming live future shock
It’s 5 dimensions, 6 senses
7 firmaments of heaven and hell, 8 million stories to tell
9 planets faithfully keep in orbit with the probable 10th
The universe expands length
The body of my text possess extra strength
Power-lift the powerless up out of this towering inferno
My ink so hot it burn through the journal
I’m blacker than midnight on Broadway and Myrtle
Hip-Hop passed all your tall social hurdles
Like the nationwide project-prison-industry complex
Working-class poor: better keep your alarm set
Streets too loud to ever hear freedom ring
Say evacuate your sleep, it’s dangerous to dream
For ch-ching, cats get the “cha-pow!” You dead now
Killing fields need blood to graze the cash cow
It’s a numbers game, but shit don’t add up somehow
Like I got 16 to 32 bars to rock it
But only 15% of profits ever see my pockets like
69 billion in the last 20 years
Spent on national defense but folks still live in fear like
Nearly half of America’s largest cities is one-quarter black
That’s why they gave Ricky Ross all the crack
16 ounces to a pound, 20 more to a ki
A 5-minute sentence hearing and you’re no longer free
40% of Americans own a cell phone
So they can hear everything that you say when you ain’t home
I guess Michael Jackson was right: you are not alone
Rock your hardhat, black, cause you in the Terrordome
Full of hard niggas, large niggas, dice-tumblers
Young teens and prison greens facing life numbers
Crack mothers, crack babies and AIDS patients
Young bloods can’t spell but they could rock you in PlayStation
This New Math is whipping motherfuckers’ ass
You want to know how to rhyme you better learn how to add
It’s mathematics

[Mos Def:]
Yo, it’s 1 universal law but 2 sides to every story
3 strikes and you biddin’ for life, mandatory
4 MCs murdered in the last 4 years
I ain’t trying to be the 5th when the millennium is here
Yo it’s 6 million ways to die, from the 7 deadly thrills
8-year-olds getting found with 9mils
It’s 10 PM, where your seeds at? What’s the deal?
He on the hill pumping krills to keep they bellies filled
Light in the ass with heavy steel, sights on the pretty shit in life
Young soldiers trying to earn their next stripe
When the average minimum wage is $5.15
You best believe you’ve got to find a new grind to get cream
The white unemployment rate is nearly more than triple for black
Some front-liners got their gun in your back
Bubbling crack, jewel theft and robbery to combat poverty
And end up in the global jail economy
Stiffer stipulations attached to each sentence
Budget cutbacks but increased police presence
And even if you get out of prison still living
Join the other 5 million under state supervision
This is business: no faces, just lines and statistics
From your phone, your Zip Code to SSI digits
The system break man, child, and women into figures
2 columns for “who is” and “who ain’t niggas”
Numbers is hard and real and they never have feelings
But you push too hard, even numbers got limits
Why did one straw break the camel’s back?
Here’s the secret
The million other straws underneath it
It’s all mathematics (math)