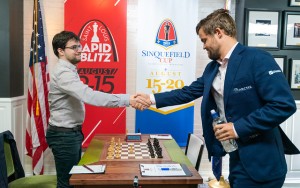 with the black pieces in the final round of the Sinquefield Cup to finish in a tie for first place with Ding Liren. 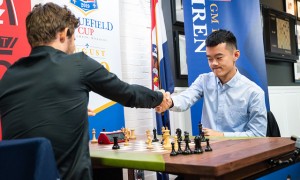 The next day the Chess tournament devolved into much faster time controls and the World Champion lost the exhibition, causing some to report the man from China had actually ‘won’ the tournament. Ding had a better performance rating than Magnus, 2845 to 2838. There are many ways, including performance rating, to determine a “winner,” without forcing the best human players on the planet to play Blunder Fest Chess. FIDE has led the Chess world into Mass psychogenic illness. (Mass psychogenic illness (MPI), also called mass sociogenic illness, mass psychogenic disorder, epidemic hysteria, or mass hysteria, is “the rapid spread of illness signs and symptoms affecting members of a cohesive group, originating from a nervous system disturbance involving excitation, loss, or alteration of function, whereby physical complaints that are exhibited unconsciously have no corresponding organic aetiology”.)
https://en.wikipedia.org/wiki/Mass_psychogenic_illness

Although there are a few sane humans who realize Ding and Magnus were Co-Champions of the Sinquefield Cup we are vastly outnumbered by weak-minded, go along to get along type followers. Maybe things will change after Ding defeats Magnus to win the World Human Chess Championship as the Chinese will then rule the Chess world and could possibly restore sanity to the Royal game. We sane fans can only hope…