It is a half hour before the start of the quick play part of the 2018 World Human Chess Championship and I have just finished reading the article, Kramnik: “Magnus needs to get rid of this fear of losing the title” at Chessbase.(https://en.chessbase.com/post/kramnik-on-the-2018-world-championship-match) 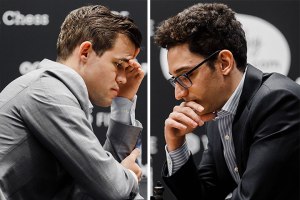 I have yet to watch any quick play games in any previous World Human Chess Championship but have decided to watch today. If one is fortunate enough to become old the realization hits that this could be the last World Human Chess Championship. In addition, there is the fact that I have devoted much time the past couple of weeks to watching the mostly moribund games and have a desire to see the conclusion.

What I would like you to consider is, what if there were no quick play tie breaks? What if the challenger had to beat the champion in order to take the champs title? Obviously Fabiano Caruana would have been forced to decline Magnus Carlsen’s offer of a draw in the final game as a draw would have been the same as a loss as far as the match was concerned.

In addition, what if there had been a rule that in the event of all games in the regulation period of the match ending in a draw the games would continue until one player won a game?