The question I have been asked more than any other is “Why did you drive a taxi?” This was usually followed by, “Wasn’t it dangerous?” My response was usually, “Living is dangerous.” Think of it, some poor fellow in Florida was sitting in his home when the earth opened and swallowed him alive. I read a book about the odds of everything like dying in an automobile, plane or train, etc. No one thinks of the odds of returning home safely after visiting a grocery store, but the odds of returning home alive are not one hundred percent in your favor…

I drove a cab because of a book I had read years earlier written by W. Somerset Maugham

The book features one of the longest and most remarkable soliloquies by the protagonist, Larry Darrell, I have read in any novel. The book was made into a movie twice, in 1946 with Tyrone Power as Darrell, 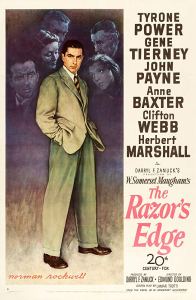 and again in 1984 with Bill Murray

playing the lead. But watching one or both of these movies will not bring you understanding of why I got behind the wheel of a taxi doing what was not just a job but an adventure. Only reading the book will allow you to understand why I drove a cab.

EVERYTHING YOU EVER WANTED TO KNOW ABOUT SOMERSET MAUGHAM’S
NOVEL THE RAZOR’S EDGE. WHO LARRY DARRELL WAS IN REAL LIFE, WHAT
HAPPENED TO HIM, ETC.
http://the-wanderling.com/razors_edge_ring.html

2 thoughts on “Why Did You Drive A Taxi?”