An article, How God plays chess, by Frederic Friedel, was published 1/23/2018. at the Chessbase website. It contained this story: 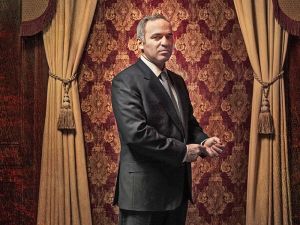 who towers above all his rivals, reached an Elo of 3000. When the rating list was released the heavens over Baku opened and an Angel of the Lord descended. He approached Garry and said: “For what you have achieved you are invited to play a game of chess against God.”

Garry was overwhelmed. He dressed into his finest and got onto the golden escalator that transported him to heaven. There the Angel led him into a small room where God was sitting, drinking coffee and looking at a computer screen. Garry was somewhat surprised that He was wearing jeans and a t-shirt, and had a fairly unkempt white beard. He bowed deeply and said:

“Just call me God,” God interrupted. “Or G, which is what most of my friends call me.”

“Okay, God, it is a great privilege for me to stand in your presence and to actually play a game of chess against you. Of course I have absolutely no expectation of winning. I assume you play a perfect game!?”

“Ahh,” said Garry, “Of course that is trivially easy for you.”

“No, no,” said God, “it was really tough. More than 10^35 legal positions — it took the matter from a good-sized planet to store. But let us play. You can have white.”

So Garry played his favourite 1.e4, expecting an exciting Sicilian. But after a few moves the game had left all known theory and a weird position was on the board. Actually God’s position was in shambles. “This is divine humour,” Garry said, “You want me to have a chance, God?” But He just smiled and said “No.” Soon Garry was two pawns up and had an overwhelming position. “But I am winning for sure now,” he said. “No,” said God, “it is a draw. The whole game is a draw. Can’t be won.”

Garry was not convinced. He played on with great attacking moves, and even won an additional piece. Surely now he was completely winning. He reached a stage where it was clearly only a matter of technique to mate the opponent. However, try as he might, he was not able to actually deliver mate. There was always some unexpected defence, some bizarre move that prevented it. He tried this and that, but somehow could not succeed.

Then suddenly God interrupted a phone call he was making and stared in disbelief at the board. “My Self!” he said, “It’s a win! I haven’t seen one in a billion years.” “But I can’t find it,” said Garry, “I cannot seem to convert my advantage to a mate.” “Oh, no,” God said, “it is a win for me — for Black. This only happens once in a decillion times.”

The game proceeded, and God, now fully concentrated, started making moves that were completely incomprehensible to Garry. But they slowly improved Black’s position. Soon the game was equal, and then Black started to take what for Garry seemed to be the “initiative”. Then, in a flurry of unexpectedly brilliant moves, he found himself mated.

“I will be eternally grateful, God, for this demonstration of your omniscience,” Garry said in parting. “I thank you for a very interesting game, Garry,” God replied. “A one in a billion experience.”

The entire article can be found here: