At the 1994 Linares Chess tournament World Chess Champion Garry Kasparov “…brought down shame” on himself, and the Royal game, when he cheated GM Judit Polgar by violating the touch move rule. 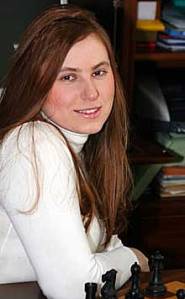 Please watch this before reading further:

Because Kasparov cheated Judit he altered Chess history. Imagine the headlines if he had been true to the game, as so many golf professionals have historically been, and Judit, the highest ranking woman player ever in the game of Chess, had been victorious. Imagine what it could have done for the Royal game with the interest of females piqued. Imagine what it would have done for Kasparov’s reputation if he had acted honorably. If he had done so he would have been applauded and there would not have been a black cloud hovering above him for almost a quarter of a century.

Garry said he did not do it but no one ever really believed him. Now modern science has proven the World Chess Champion cheated a seventeen year old GIRL!

Executive control involves the ability to flexibly inhibit or change an action when it is contextually inappropriate. Using the complimentary techniques of human fMRI and monkey electrophysiology in a context-dependent stop signal task, we found a functional double dissociation between the right ventrolateral prefrontal cortex (rVLPFC) and the bi-lateral frontal eye field (FEF). Different regions of rVLPFC were associated with context-based signal meaning versus intention to inhibit a response, while FEF activity corresponded to success or failure of the response inhibition regardless of the stimulus response mapping or the context. These results were validated by electrophysiological recordings in rVLPFC and FEF from one monkey. Inhibition of a planned behavior is therefore likely not governed by a single brain system as had been previously proposed, but instead depends on two distinct neural processes involving different sub-regions of the rVLPFC and their interactions with other motor-related brain regions.

An article at Medical Express puts it into words somewhat more understandable words:

Why we can’t always stop what we’ve started 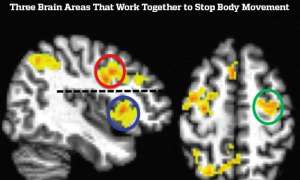 When we try to stop a body movement at the last second, perhaps to keep ourselves from stepping on what we just realized was ice, we can’t always do it—and Johns Hopkins University neuroscientists have figured out why.

Stopping a planned behavior requires extremely fast choreography between several distinct areas of the brain, the researchers found. If we change our mind about taking that step even a few milliseconds after the original “go” message has been sent to our muscles, we simply can’t stop our feet.

“We have to process all of these pieces of information quickly,” said senior author Susan Courtney, a professor of psychological and brain sciences. “The question is: When we do succeed, how do we do that? What needs to happen in order for us to stop in time?”

These findings, which will appear Dec. 20 in the journal Neuron, map the neural basis for inhibiting movement. They help explain what’s going wrong in the brain when people fall more as they age and when addicts can’t stop binge behavior.

Scientists had believed only one brain region was active when people changed plans. But the findings of Courtney’s team suggest it takes a lightning-fast interaction between two areas in the prefrontal cortex and another in the pre-motor cortex to stop, reverse or otherwise change a plan already in progress.

There is even another brain area, Courtney says, that continues to process what we should have done if we are unable to stop. She jokingly calls it the “oops” area.

In addition to all three areas of the brain communicating successfully, the key to being able to stop, the researchers found, is timing.

Suppose you’re driving and approaching an intersection when the light turns yellow. You decide to accelerate and speed though. But just after you send that decision to the part of the brain that will move your foot to hit the gas, you notice a police car and change your mind.

“Which plan is going to win?” said first author Kitty Z. Xu, a former Johns Hopkins graduate student who is now a researcher at Pinterest. “The sooner you see the police car after deciding to go through the light, the better your chance of being able to move your foot to the break instead.”

And by soon, Xu means milliseconds.

If you attempt to change your mind after 100 milliseconds or less, you most likely can. If it takes you 200 milliseconds or more—that’s less than a quarter of a second—you’re still going through with the original plan. That’s because the original signal is already on its way to the muscles by then—past the point of no return.

“If you’re already executing the plan when you see the police car,” Xu said, “you’re going to go through the light.”

If we change our mind about taking that step even a few milliseconds after the original “go” message has been sent to our muscles, we simply can’t stop our feet.

“In one famous instance, Garry Kasparov changed his move against Judit Polgár in 1994 after momentarily letting go of a piece. Kasparov went on to win the game. The tournament officials had video records proving that his hand left the piece, but refused to release the evidence. A factor counting against Polgár was that she waited a whole day before complaining, and such claims must be made during the game. The videotape revealed that Kasparov did let go of the piece for one quarter of a second. Cognitive psychologist Robert Solso stated that it is too short a time to make a conscious decision.” (https://en.wikipedia.org/wiki/Cheating_in_chess)