The chiseler was caught red-handed at the Dubai Open.

In the article at chess-news.ru GM Tigran Petrosian says, “”I was suspicious about my opponent already after the tournament in Al Ain in December, where we both had been taking part. Nigalidze won that tournament; during our game he would go to the toilet very often, as well as this time. However, in Al Ain I had no evidence, I could only make guesses. Today, my suspicions have been confirmed…

In our today’s game, Nigalidze would promptly reply to my moves and then literally run to the toilet. Twice, I made my moves promptly as well, so that he couldn’t leave, and he made mistakes on those occasions. Then I decided to keep an eye on him. I noticed that he would always visit the same toilet partition, which was strange, since two other partitions weren’t occupied.

I informed the chief arbiter about my growing suspicions and asked him to keep an eye on Gaioz. After some time, the arbiter approached me and said that he had checked my opponent and found nothing. I asked him to check Nigalidze again, because I was already sure that something was wrong.

After my opponent left the very toilet partition yet another time, the arbiters entered it. What they found was the mobile phone with headphones; the device was hidden behind the pan and covered with toilet paper.

We both were sitting at the board, when the chief arbiter came up to Nigalidze and showed him the mobile phone, asking: “Is this yours?” Nigalidze blushed, got confused and couldn’t say anything.

The arbiter forfeited him in the game. I went outdoors, and Gaioz approached me. I thought he was going to apologize, but he only asked me what was going to happen to him as a result.”
(http://chess-news.ru/en/node/18610)

It used to be the only players caught cheating were not very good, but now that a Grandmaster has been caught using a gizmo to cheat it is obvious chess cannot withstand the rise of the programs. Every game this man has played is now suspect. Everyone who plays chess is a suspect. How long do you think chess will be played? 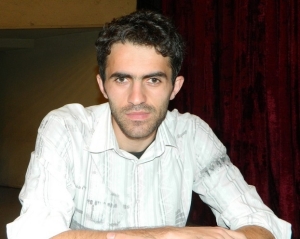